A Trigana Air Boeing 737-300SF has been involved in a serious incident while landing at Wamena Airport in the province of Papua, coming down on its belly with only its front landing gear apparently deployed.

The carrier did not respond to FlightGlobal’s enquiries, but social media sources say the incident took place at 07:33 local time as the aircraft, operating flight TGN-7321, was flying from Sentani Airport in Jayapura to Wamena, which has since been temporarily closed.

A video clip shows the aircraft, registered PK-YSY (MSN 23597), landing on its belly. While the front landing gear is deployed, the main landing gear is not visible. The incident appears to have occurred amid gray, overcast conditions, with moisture apparent on the runway. 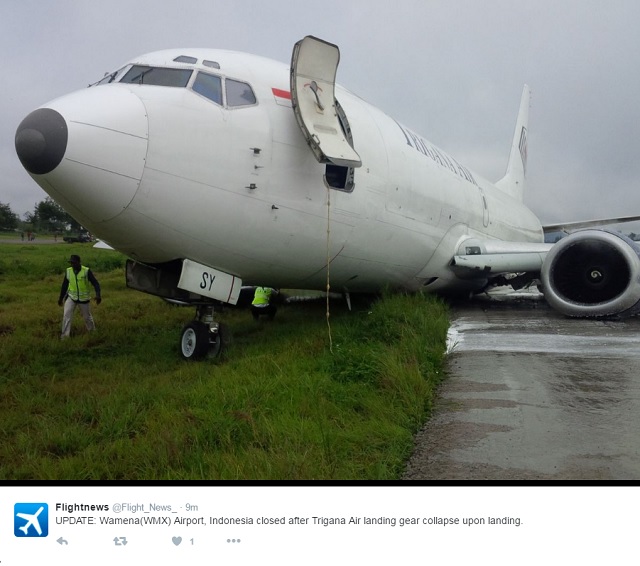 Still imagery shows tears to the fuselage after the the left-side wing and extensive damage to the left-side cowling and engine, which is resting directly on the ground.

Another still image shows what appears to be one of the bogies from the main landing gear, torn off the aircraft. 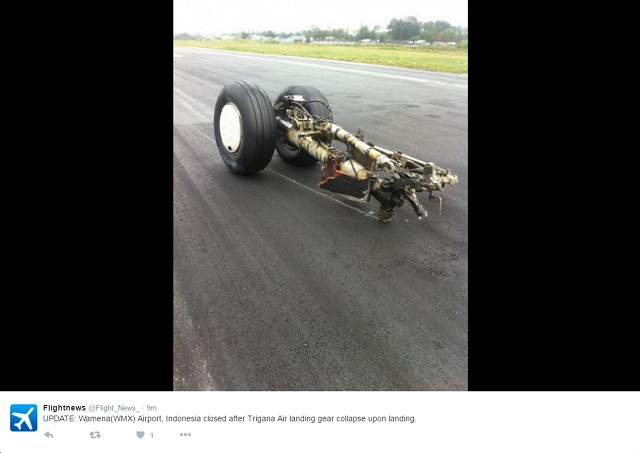 There is no immediate visual indication that a fire or explosion occurred. The aircraft came to rest with its forward wheel and centre fuselage resting on the grass alongside the runway. The left wing and tail are at rest on the runway.

Flight Fleets Analyzer shows that PK-YSY is managed by Orix Aviation. The aircraft is 30 years old, having been originally delivered configured for passenger service to Western Air Lines in 1986, prior to Western’s takeover by Delta Air Lines.

The aircraft was converted to a freighter in 2008, and served with Cardig Air from October 2008 to December 2009. Trigana has leased the jet since September 2011.

There were no reported injuries to the crew, which was transporting fuel and sugar.