US regulators have disclosed that two “nearly catastrophic” events were among 38 take-off incidents involving inadvertent Airbus A220 autopilot engagement, and are taking additional action to prevent a recurrence.

Transport Canada has already mandated aircraft flight manual changes to emphasise the risk of unintentionally activating the autopilot during the take-off roll.

But the US FAA is imposing an additional requirement after an incident in September in which the crew attempted to re-engage a disconnected autothrottle but mistakenly activated the autopilot, causing the jet to rotate below the V1 decision speed.

“This resulted in a low-energy take-off, which is extremely hazardous as it could lead to the [aircraft] stalling [or] impacting terrain,” says the FAA in a 22 November directive.

Autopilot and autothrottle buttons for the A220 are located, one directly above the other, in the centre of the mode control panel. 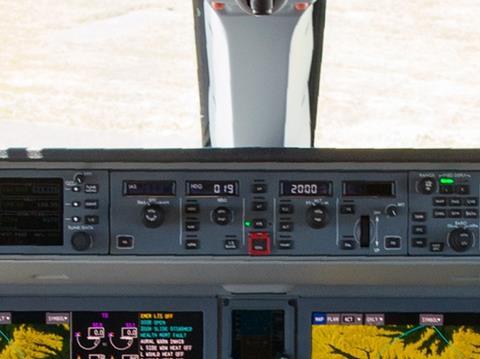 Activation of the autopilot is normally prohibited below 400ft.

The FAA states that the autothrottle is “prone to disconnect” during turbulence because it sources airspeed information from a different source than the flight control system monitor. Different sources for pressure altitude between systems can also cause a disconnection.

Operators have already been instructed by Transport Canada to amend flight manuals to warn that inadvertent autopilot engagement could result in premature rotation, tail-strike, inability to climb or a loss of control.

But the FAA’s directive goes further by requiring an additional limitation in the manual – the prohibition of selecting or re-selecting the autothrottle once the thrust levers have been advanced to the take-off setting.

This will apply until the aircraft is at least 400ft above ground, the threshold for autopilot engagement.