Data retrieved from the flight data recorder of the Lion Air Boeing 737 Max 8 that crashed on 29 October shows that the jet’s nose was repeatedly forced down before the pilots lost control of the aircraft.

The chart detailing parameters of the accident flight was released by Indonesia’s National Transport Safety Committee (NTSC) in a presentation to the Indonesian parliament on 22 November. The data will likely form the backbone of a preliminary report that the committee is scheduled to be released on 28 November. 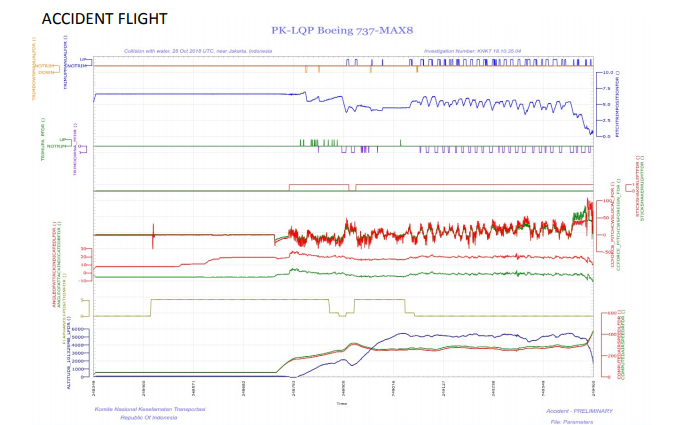 The data shows that the aircraft pitched nose-down more than two dozen times during the 11-minute flight, with the pilots pulling the nose up each time, before eventually losing control of the aircraft.

The aircraft's cockpit voice recorder has not been recovered.

The NTSC says the aircraft’s Maneuvering Characteristics Augmentation System (MCAS) kicked in during the flight, and is a central focus of the investigation, Indonesian media reports. At issue is also how erroneous angle-of-attack sensor information could have forced the aircraft's nose down.

MCAS is a new feature added to the 737 Max to enhance pitch characteristics while the aircraft is being manually flown at a high angle of attack with the flaps up. The system commands stabiliser movement, without pilot input, to pitch the aircraft nose down.

The presentation also shows a chart from the previous day's flight between Denpasar and Jakarta, where the aircraft’s nose was also pushed down repeatedly early in the journey. The crew of that flight too made over a dozen nose up commands. The difference from the doomed JT610 was that the MCAS appeared to have been turned off thereafter, and the aircraft continued to its destination without further incident.

The Lion Air 737 Max 8 was operating from Jakarta to Pangkal Pinang when it crashed into the sea, killing all 189 passengers and crew on board.