Poor separation by ATC led to close call at Melbourne

Two Qantas Boeing 737-800s involved in simultaneous go-arounds at Melbourne airport came within 0.9nm (1.2km) of each other on 5 July 2015 as the tower controller was not able to maintain separation between them.

In its final report on the incident, the Australian Transport Safety Bureau states that the airport was using land and hold short operations (LAHSO) to allow for simultaneous landings across its two intersecting runways.

A trainee air traffic controller under supervision had issued instructions for an Emirates Boeing 777-300ER (registered A6-EBU) departing for Singapore to line up and immediately depart runway 34, at the same time that the two 737s (VH-VYE and VH-VXS) were on approach to runways 34 and 27.

As a result of the 777 taking longer than expected to taxi onto the runway and commence its take-off roll, the controller requested VXS, which was inbound to land on runway 27, to reduce to minimum speed. The crew responded that they already were at minimum speed and were given additional instructions to expedite climb to 4,000ft in the event of a missed approach.

At the same time, VYE was around 1nm from the runway 34 threshold and passing 800ft on descent. A co-ordinator controller in the tower expressed concern that separation between the departing 777 and the 737 landing on runway 34 could not be maintained. After failing to receive an adequate response, he instructed the trainee controller to send the 737 around, at which time a runway occupancy caution sounded. 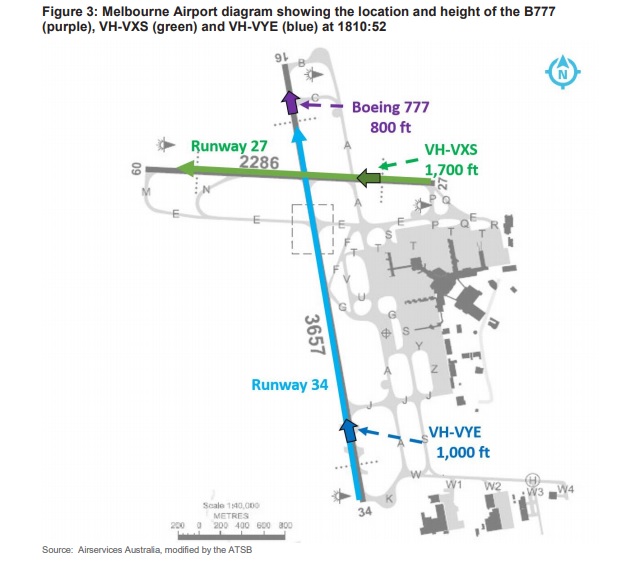 Shortly after that, the trainee controller was instructed to tell the flight crew of VYE to turn right onto a 360 degree heading, while the aircraft was under the minimum vector altitude of 2000ft.

“At that time, surveillance data showed the B777 north of the runway 27 intersection climbing through 800 ft and VXS overhead runway 27 climbing straight ahead through 1,700 ft,” says the ATSB.

With the 777 departed enroute to Singapore, the two 737s were re-sequenced to land at Melbourne without further incident.

At the time, the tower controller was responsible for maintaining separation using visual standards, but the ATSB found that could not be assured due to it being twilight and the trajectory of the aircraft.

It found a safety issue in the controller’s inability to separate aircraft below the appropriate lower safe altitude at night, leaving “no safe option available for air traffic controllers to establish a separation standard when aircraft were below minimum vector altitude.”

Five days after the incident, LAHSO procedures at Melbourne were suspended. In April 2016, Airservices Australia was granted a waiver by the Civil Aviation Safety Authority to radar vector aircraft below the minimum vector altitude when carrying out simultaneous go-arounds during LAHSO, leading the procedures to be reinstated.

The ATSB commented that the action taken by Airservices had been assessed as adequate by CASA and therefore addressed the safety issue.