No Progress for Space Station as resupply mission fizzles

An ill-fated Russian mission to resupply the International Space Station is set to end in a high atmosphere streak of fire, with an uncontrolled re-entry expected between 5 and 7 May.

Launched from Baikonur cosmodrome on 28 April, the unmanned Progress 59 and its 2.7t (6,000lbs) of food, fuel and other supplies should have reached the ISS after four orbits and 6hrs. But navigational antennae failed to deploy following separation from the main rocket, leaving Russian ground controllers unable to contact the vehicle.

With the craft spinning uncontrollably and apparently in a wrong orbit, the rendezvous with the ISS was quickly revised to two days and 34 orbits – but during multiple passes over ground stations all attempts to contact Progress failed. After about 24hrs the Russian space agency Roscosmos abandoned hope of docking with the station, and it has said it expects the craft to drop back into the atmosphere and burn up as early as 5 May. 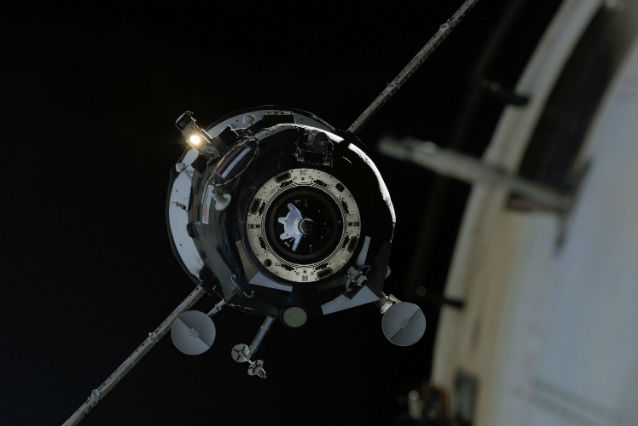 A Progress ship on successful approach viewed from the ISS

Controlled re-entries are carried out over the south Pacific when possible, but unless Roscosmos regains some contact with the spacecraft, Progress will come down where it does. The frictional heat of atmospheric re-entry makes returning from orbit one of the most challenging aspects of spaceflight – it is sufficient to burn up most items not specifically protected by heat shields. Large pieces of spacecraft can reach the surface of the Earth, however, but danger to anyone on the ground is minimal – if for no other reason than most of the planet’s surface is water or uninhabited.

The cause of the failure is not yet clear, and Progress missions to the ISS have normally been reliable.

Following launch, the US Air Force Joint Space Operations Center at Vandenberg reported that its radar, which tracks all orbiting objects bigger than about 10cm, had "observed 44 pieces of debris in the vicinity of the resupply vehicle and its upper stage rocket body” – but it could not confirm if the debris came from the rocket body or the Progress vehicle.

The ISS is in no danger from the Progress ship, as they are in “very different” orbits, according to Russian state news agency Tass.

The six-person ISS crew, which at the moment includes three Russians, is in no immediate danger of running short of supplies – despite the Progress failure and the spectacular launchpad fireball that destroyed an Orbital Sciences Antares resupply rocket on 28 October 2014. A SpaceX Dragon resupply vehicle reached the station about two weeks before the Progress failure – critically, carrying an espresso machine built specially by Lavazza in Italy for zero-gravity performance – and another is scheduled to launch on 19 June. Another Progress launch is scheduled for 6 August, but this can probably be brought forward if necessary.

On 26 May, the ISS Expedition 44 crew of Kjell Lindgren (USA), Kimiya Yui (Japan) and Oleg Kononenko (Russia) will launch from Baikonur. They will replace Samantha Cristoforetti (Italy), Anton Shkaplerov (Russia) and mission commander Terry Virts (USA), who return to Earth on 12 May.