Both aircraft performed stability tests and also checks on systems.

Comac adds that the narrowbody programme is progressing “steadily as planned”, and that flight tests, static strength tests and ground tests, as well as subsequent optimisation will be carried out “in an orderly manner”. 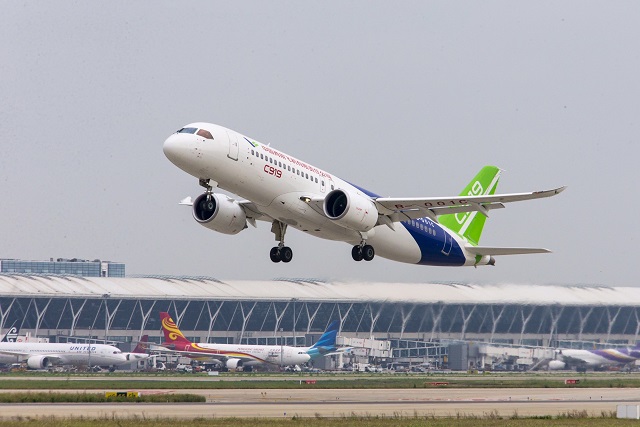 It adds that aircraft 101 was earlier undergoing modifications and load calibrations in Xian. Changes were made to its counterweight and trailing cone systems. Aircraft 102 has also had its functions and systems checked, together with tests and modifications, and will soon be transferred to the Dongying test base.

The flights of the two aircraft followed a media report that the manufacturer had grounded its two test prototypes for modifications, which will add three months to its flight-test schedule. The report had said that the aircraft were having their tailplanes and flaps modified, due to delamination on the elevators and strength issues respectively.

When contacted, Comac said no aircraft have been grounded and that modifications are part of the flight test process. It adds that no issues have so far come up to affect its schedule and that the programme is progressing steadily. The target is to achieve certification and enter the C919 into service in the 2020-2021 period.

Aircraft 103 is meanwhile undergoing final assembly, with wing to body join already completed. Cables and airborne systems are being installed, and the target remains for the aircraft to take its first flight by the end of the year.

“All is stable but we know that problems and challenges will exist and we are prepared. After years of experience on the ARJ21 we know that not all will be smooth-sailing,” says Comac.