Russian developers of a 300-seat aircraft with a characteristic wide elliptical fuselage have opted to modify the proposal substantially, revising the design as a four-engined transport rather than a twinjet.

The aircraft – developed by Frigate Ecojet, and rebranded as the 'Freejet' – will be powered by modern engines introduced for the single-aisle market.

Frigate Ecojet says it has embarked on a study to examine the use of Aviadvigatel PD-14 engines on the proposed aircraft. The PD-14 is being developed for the Irkut MC-21.

Aviadvigatel is participating in the study, it claims.

But the Ecoject team also indicates that the Pratt & Whitney PW1100G and the CFM International Leap are options.

But the design has been revamped as a four-engined airframe powered by engines with 12,000-14,000kg thrust. Its proposed maximum take-off weight has risen from just under 130t to a little over 140t. 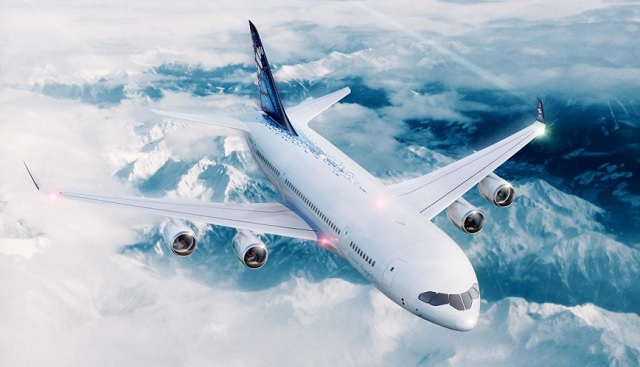 "We lost a little in aerodynamics and weight [against the original Ecojet] but gained a lot of advantages," says programme manager Alexander Klimov.

The aircraft will be able to use current engine technology and will aid the evolution of an all-electric concept, he says.

Switching to a four-engined design, however, will result in an aircraft outwardly resembling the Airbus A340 – which, like the proposed Freejet, was also fitted with powerplants used on the single-aisle A320 and Boeing 737.

With an all-economy layout for 300 passengers in a 10-abreast triple-aisle cabin, the Freejet would have a range of 3,500km, claim its designers, increasing to 4,680km with 244 passengers.

Technical specifications for the Freejet's systems will be established by the end of the year, the developer says.