Documents released by the National Transportation Safety Board in recent days also prompt questions about safety culture and reveal that the aircraft's first officer had expressed concern about captain.

Those concerns involved sleeping in the cockpit, steep turns and descent rates at low altitude, and trouble with instrument flying, NTSB documents show.

However, those specific concerns involved earlier flights, and the NTSB has not yet determined the cause of the accident.

The Shorts 330 freighter, registration N334AC, was operating UPS-contracted flight 1260 from Louisville when it crashed at 06:51 local time while landing on Runway 5 at Charleston on 5 May 2017.

The aircraft was manufactured in 1979 and did not carry a flight data or cockpit voice recorder.

Newly-posted video shows the aircraft approaching the airport in an unusually-steep dose-down angle and then turning left, which the NTSB says was an effort to align with Runway 5.

The video, which the Charleston airport confirms came from its cameras, also shows the aircraft slam into the runway and slide left off the runway.

Steven Altnau, president of Milwaukee-based Air Cargo Carriers, declines to comment about the accident to FlightGlobal, saying the company is waiting until the NTSB issues a final report. The company now operates 19 Shorts 360s, according to Flight Fleets Analyzer.

The main wreckage of the crashed Shorts 330 at Charleston. 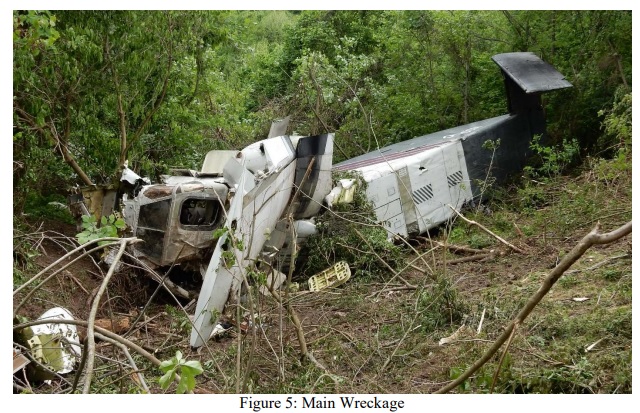 NTSB documents disclose that the first officer, a new pilot and former flight attendant, had expressed concern about the captain, who was at the controls of the Shorts at the time of the accident, according to flight logs and voice communications.

The 47-year-old captain joined the company in July 2015, and earlier worked as a "bush" pilot for Alaska companies like Grant Aviation, Alaska Seaplanes and Lliamna Air Taxi, says the NTSB.

"Just had the biggest scare of my life. Thought I was going to die," the 33-year-old first officer texted a friend December 2016. She was describing a flight during which she and the captain returned to the airport following a landing gear problem after takeoff.

"He was making really, really steep turns, like 60° of bank and descending at like 800ft/min," she wrote of the captain. "The whole time I'm like, we're gonna hit the hills."

They landed in a strong crosswind.

"We were only a few feet from hitting that bank on the side on the runway when he was able to turn it back," she wrote.

The first officer, who was sending the texts while in flight, noted that the captain was at that moment "sleeping".

"She described a series of flights in February 2017 where the captain asked her to fly every leg for four days in addition to handling radios while he slept," says the NTSB.

Some former Air Cargo Carriers pilots described "a culture where senior pilots with experience as captains felt like they could bend boundaries of [standard operating procedures], and the [first officers] may not be taken seriously."

"Former pilots interviewed stated that they had witnessed instances of [standard operating procedures] being disregarded when they were flying at [Air Cargo Carriers]," documents say.