Airbus’s advanced wing demonstrator, based on a Cessna Citation VII business jet, will include actuation technology from US manufacturer Curtiss-Wright.

The ‘eXtra Performance Wing’ programme will examine active wing control through features such as gust sensors and pop-up spoilers.

Among these is a semi-aeroelastic hinge which will provide an “intelligent wing-tip”, says Curtiss-Wright, potentially supporting the reduction of carbon dioxide emissions.

The company will supply an actuation system to control the hinge on the scaled demonstrator aircraft.

Curtiss-Wright says the system will include a “complete package” of equipment and capabilities to enable the semi-aeroelastic hinge function.

“The demonstrator will improve and optimise wing aerodynamics and performance for future commercial aircraft, regardless of propulsion solution and aircraft configuration.” 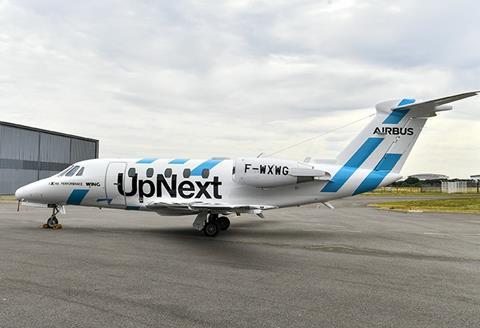 Semi-aeroelastic wing-tips are among the technologies to be demonstrated

Biomimicry, the application to technology of designs found in nature, has played a role in the programme.

Airbus, which has conducted windtunnel testing of the Citation model, has also previously flown a small-scale version of the hinged wing on a demonstrator through the ‘AlbatrossOne’ project.