The US Department of Transportation (DOT) will impose a 40% capacity limit on Chinese airlines flying into the US, following a similar move by Beijing on four United Airlines flights to the Chinese mainland. 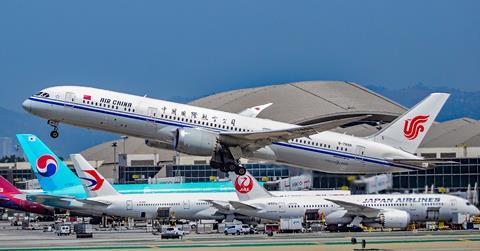 The move by the DOT comes as Chinese students head to the US for class in the autumn.

The Civil Aviation Administration of China (CAAC) on 6 August imposed sanctions on United Airlines after five passengers on a 21 July flight from San Francisco and Shanghai Pudong were tested positive for the coronavirus.

As part of measures to curb the number of imported infections into the country, Chinese authorities have implemented “circuit breaker” measures for airlines found to carry coronavirus-positive passengers.

While previously airlines had to suspend operations for two weeks, Beijing in April adjusted these restrictions, offering airlines a second option of operating at 40% load factors for four weeks.

Washington has “repeatedly raised its objections” with China about the nature of the restrictions, which the DOT has called “unilaterally-imposed”.

“In particular, the [US government] has conveyed its view that the ‘circuit breaker’ measure places undue culpability on carriers with respect to travellers that test positive for Covid-19 after their arrival in China. As carriers are following all relevant Chinese regulations with respect to pre-departure and in-flight protocols, they should not be penalised as a result of travelers later testing positive,” the DOT states.

The US and China have crossed swords over commercial flight operations during the pandemic. In June 2020, Washington threatened to bar Chinese carriers from flying to the US, in retaliation for a Chinese order that US officials said effectively prohibits US airlines from resuming China flights.

It walked back on the ban, allowing Chinese airlines to fly up to four times weekly between both countries. China also eased restrictions on US carriers flying into the mainland.