Air France-KLM Group has secured government funding to help the operator cope with the impact of the coronavirus crisis.

The group had previously warned that, despite measures to preserve liquidity, it would need a capital injection in the third quarter of this year.

It has negotiated a French state-backed loan of €4 billion ($4.3 billion) from a syndicate of six banks to be distributed to Air France-KLM and Air France.

The French government is guaranteeing up to 90% of the loan, which has a 12-month maturity.

There will also be a direct four-year shareholder’s loan of €3 billion from the French government to Air France-KLM. Both packages have two one-year extension options. 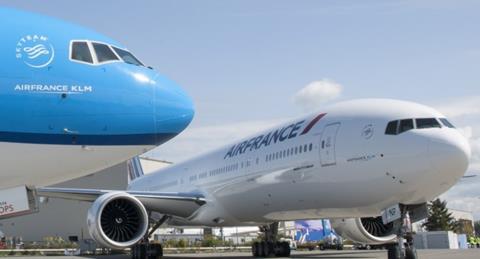 KLM is to receive €2-4 billion in financial support from the Dutch government, the country’s finance ministry has disclosed.

“The precise structure of the support, which is expected to consist of a guarantee and a loan, is currently being worked out,” the ministry says, adding that “certain conditions” will be attached.

It will require the airline’s personnel to take pay cuts – with higher earners contributing the most – while the carrier will have to refrain from paying dividends or bonuses.

But KLM will also be ordered to contribute environmentally, by reducing the number of night flights, as part of the deal. The ministry says the company will need to make “sacrifices”, conditions which are “justifiable and reasonable”.

“I realise that [this] message is not easy for KLM,” says finance minister Wopke Hoekstra. “But we are talking about taxpayers’ money, our money, which is now needed to strengthen KLM’s financial position.”

Air France-KLM Group and its two carriers will need to take restructuring measures. The group says a transformation plan is being finalized which will include economic, financial and environmental commitments.

“It will notably involve a review of Air France’s activities, looking to adapt them to the new market reality brought about by the crisis, and will have to strengthen its financial situation,” it states.

Once this plan has been finalized, the group says, the Air France-KLM Group board will consider increasing its equity capital subject to market conditions.

“In this context, the French state has indicated its intention to examine the conditions under which it might participate in such an operation to increase its capital,” it adds.

Air France-KLM Group chief executive Benjamin Smith says the financial assistance will “enable us to withstand this crisis” and “foresee the future of Air France-KLM with ambition and determination”.