Calendar year 2014 has turned out to be the best 12 months ever for airline safety, according to Ascend, a Flightglobal advisory service. For many this may seem an unexpected result, given the perceptions created by the high-profile losses of two Malaysia Airlines Boeing 777s and the crash of an AirAsia Airbus A320 just before year-end.

Ascend’s director of air safety and insurance, Paul Hayes, reveals that the global airline fatal accident rate in 2014 was one fatal accident per 2.38 million flights. On this basis 2014 was, narrowly, the safest year ever.

Take a look at the accidents and incidents 2014 table here

The figures exclude the 17 July loss over eastern Ukraine of Malaysia flight MH17, on the grounds that it was shot down by a guided missile and is considered a war risk loss, not an accident. Although doubts exist about the status of missing Malaysia flight MH370 (see accident tables), that incident has been included in the fatal accident rates. If the disappearance were, however, eventually confirmed as the result of a deliberate act by someone on board – as many experts in Malaysia and elsewhere now believe – and if it were therefore excluded from the accident statistics, its absence would make the 2014 figures even more impressive. MH370 was the largest single loss of the year in terms of people presumed dead as a result of the incident.

The 2014 Malaysian disasters, however, have twisted perceptions of airline safety, despite 2014 being such a safe year. Ascend’s 2014Safety Perception Survey starts by quoting an actual newspaper headline fairly representative of media reaction: “As another jet crashes… is it safe to fly?” The study later sums up why this appears to be the perception: “The year 2014 will be remembered for the loss of the two Malaysia Airlines Boeing 777s, resulting in 510 passenger and 27 crew deaths. 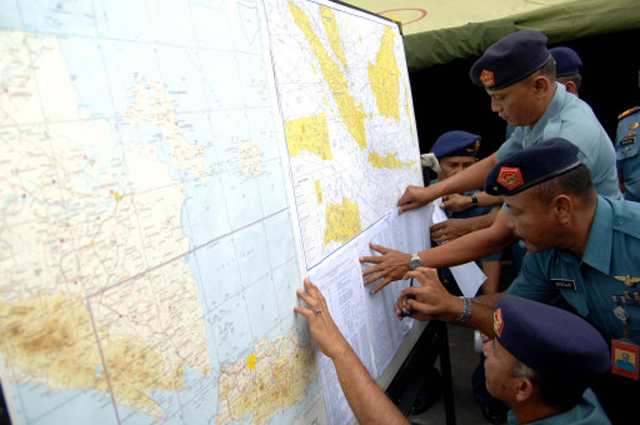 During January, Indonesian authorities have been trying to recover AirAsia Airbus A320 that crashed into the Java Sea on 28 December

“Given the strange circumstances surrounding the disappearance of the first 777, which is considered likely due to some form of unlawful interference, and the shooting down of the second, these losses would seem to be more to do with security than safety. Nevertheless, they still would have had a significant impact on the public perception of airline safety.”

The fact is that passengers died in aircraft. Nervous travellers do not distinguish between the causes of death.

Ascend’s fatal accident rate statistics include all commercial airline flights by jets and turboprops with a seat capacity of 14 and above. Each year Flight International publishes figures in its global airline safety review which also include relatively rare – but still existing – accidents to commercial airline flights operated with piston-engined aircraft. As a result, although the figures are similar and tell the same broad story, the numbers differ slightly (see graphs).Flight International’s 2014 figures, like those of Ascend, do not include MH17 on the grounds it was a war loss, but assume until evidence suggests otherwise that MH370 was an accident.

The statistical risk to each individual passenger is affected more by the number of passengers that died than the number of fatal accidents. As a result 2014 took a backward step in this respect, as three big jets suffered fatal accidents with the subsequent loss of everyone on board. The Ascend 2014 figures show that 6 million passengers were carried for every one that was killed in a jet accident, whereas in 2013 – in which the number of fatal accidents was higher, but the resulting fatalities much lower – almost 16 million passengers were carried for every one that died (see graph). This measure is useful for determining how safe commercial aviation is as a mass public transport system, but it feels rather artificial to a passenger who, on boarding a flight, hopes the entire flight will be safe, rather than taking comfort in the fact that his personal chance of survival is 6 million-to-one in favour. 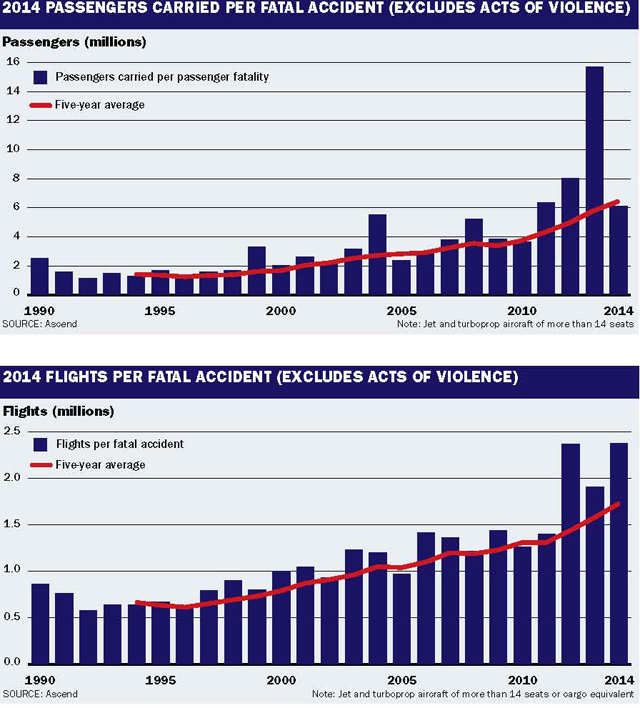 There were two accidents in 2014 that occurred in similar circumstances – both were in tropical latitudes at cruising level, and just before they disappeared their crews radioed that they needed to manoeuvre to avoid bad weather. The first was an Air Algerie/Swiftair Boeing MD-80 over Mali in July, the second an AirAsia Airbus A320 over the Java Sea in December (see accident list). For reasons yet to be established, neither crew managed to retain control of the aircraft.

It is worthy of note that in recent years the same circumstances have had a similar result in two other cases. One was the 1 June 2009 loss of Air France flight AF447, and the other the 16 August 2005 loss of a West Caribbean Airways McDonnell Douglas MD-82. AF447 was lost in the inter-tropical convergence zone over the South Atlantic Ocean while the pilots were known to be manoeuvring to avoid storm clouds. The aircraft’s flight data and cockpit voice recorders were eventually recovered, revealing that the pilots had been confused by an icing-related loss of airspeed information for less than a minute, but quickly lost control of the aircraft. The MD-82, flying from Panama City to Martinique, went out of control while the pilots were discussing how to deal with the airframe and engine icing the aircraft seemed to be suffering in the cruise. The crew were cleared by air traffic control to descend because they said they could not maintain altitude. The stall warning is known to have operated during the descent, which took 3.5min from cruise at 33,000ft to impact with the ground.

Perhaps the primary message from 2014 – delivered by the fate of flights MH370 and MH17 – is that security is as important as operational and engineering safety for preserving life. An ICAO commission is looking at the risks of flying over or close to conflict zones as MH17 did, but determining what to do about a mystery like MH370 is more difficult. If, as conjectured, the aircraft's flightpath was deliberately planned and executed by a person on board with some kind of revenge motive, how can such a person be recognised? 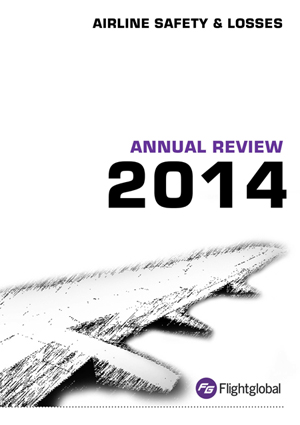