When launching rockets, there may be grades of failure – explosion and debris being total, payload damaged or in wrong orbit being partial – but anywhere along that scale is a financial and mission disaster. Success, on the other hand, is absolute – and absolutely, totally delightful.

For sure, the champagne flowed late on the night of 6 March after the European Space Agency’s light launcher, Vega, lifted a European Earth observation satellite to orbit. The 58min flight from Europe’s space centre at Kourou, French Guiana, was a perfect success, from its to-the-planned-second lift-off to delivery of the Airbus Defence and Space-built Sentinel-2B to its intended 786km altitude polar orbit.

ESA and European launch operator Arianespace (now part of Airbus Safran Launchers, ASL), along with industrial partners including Vega prime contractor ELV (owned by Italian propulsion specialist Avio and the Italian space agency, ASI) and Sentinel contractor Airbus Defence & Space, could be excused for taking perfection as a given. Heavy launcher Ariane 5 has flown a string of 77 successes, and the Ariane family has orbited more than half of the world’s geostationary telecommunications satellites, the space industry’s most lucrative payload. Soyuz, the venerable Russian mid-weight vehicle, opened the Arianespace 2017 ledger in January with its 16th flight from French Guiana; its record is not unblemished – flight 9, in 2014, left two Galileo navigation satellites in bad orbits – but mission controllers managed to recover those spacecraft to useful orbits. The Sentinel-2B flight, dubbed VV09 in Arianespace parlance, marked nine successes in nine outings for Vega.

But all of these players know better than to assume anything. After the cheers and congratulatory speeches for VV09 at mission control in Kourou, a visibly relieved – and visibly exhausted – Stefano Bianchi, who served as ESA’s Vega programme head during development and early flights, and who now heads the agency’s Ariane 6 programme, observed to FlightGlobal: “No surprises. Number nine starts to be really serious.” 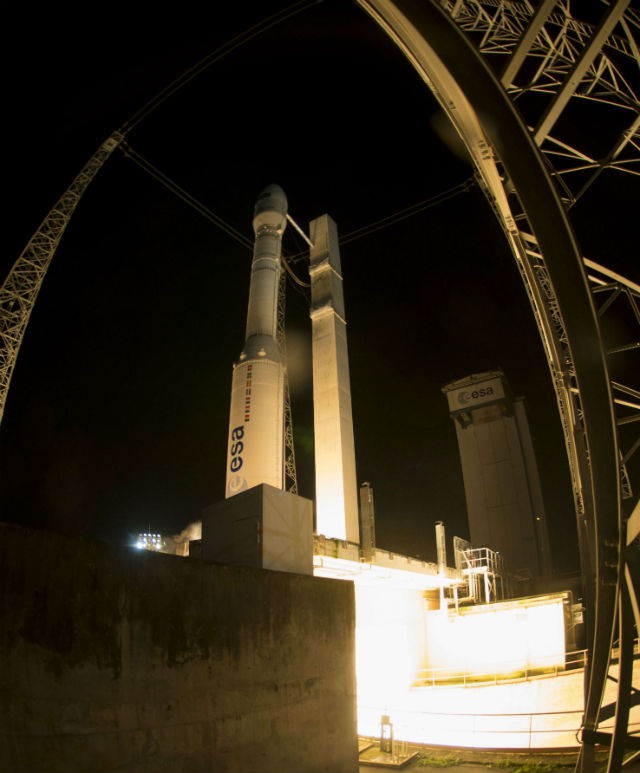 Serious, indeed. Not only are Bianchi and his colleagues too experienced to relax – much, anyway – but this particular string of flights has defined Vega’s place in a fierce commercial market. VV09 was, perhaps, the typical Vega mission and out at the limit of its performance: an Earth observation satellite, payload mass including fuel of 1,130kg, to a category of circular low-Earth orbit called a Sun-synchronous orbit, meaning that the satellite always passes over any given point on the ground at the same time of day, for consistent shadows in images. Later this year, Vega will orbit for ESA another scientific/observation spacecraft, ADM-Aeolus – a slightly heavier payload at 1,400kg, but to a lower SSO orbit at 400km.

Vega’s next flight, in July, will orbit two smaller satellites, again to polar, Sun-synchronous orbits. OPTSAT 3000 and VENµS, both built by IAI in Israel, weigh 400kg and 300kg, respectively.

Such multiple-payload missions are a Vega calling card; the main, second and third stages are solid fuel rockets, but its liquid fuel Avum upper stage is restartable, allowing great flexibility in mission profile. Such multiple launches are a way of sharing, to bring down the cost of launch.

Customers, obviously, care about price. The other things they care about are reliability – no failures – and precision; the spacecraft needs to be in a specific orbit to carry out its mission. Precision, it seems, is also a Vega long suit. According to Paolo Bellomi, vice-president for engineering and product development at Avio, early data from VV09 put the eccentricity of Sentinel-2B’s orbit at about 18m: “really close” to perfectly circular.

All of that costs €35m, the bill quoted by the European Commission for the launch of Sentinel-2B and, indeed, the target price set by ESA and Arianespace five years ago when Vega first flew. A bigger variant, Vega C, is being readied for flight from the second half of 2019 and while Arianespace hasn’t set the price yet, it has long been pegged as matching Vega.

That €35m is very close to the cost of launching Vega’s principle competitor, India’s Polar Satellite Launch Vehicle (PSLV). That programme has a long record of reliability, and India has ambitions to be a major player in space. Regardless, Vega C promises to shake up an already dynamic market for small satellite launches. A bigger solid fuel main stage – the 120cm diameter P120 engine will double as boosters for Ariane 6 – and a new second stage and a modified Avum upper stage will take maximum payload to 2,200kg to low-Earth orbit. As Bellomi puts it, that’s 50% more performance for the same price. 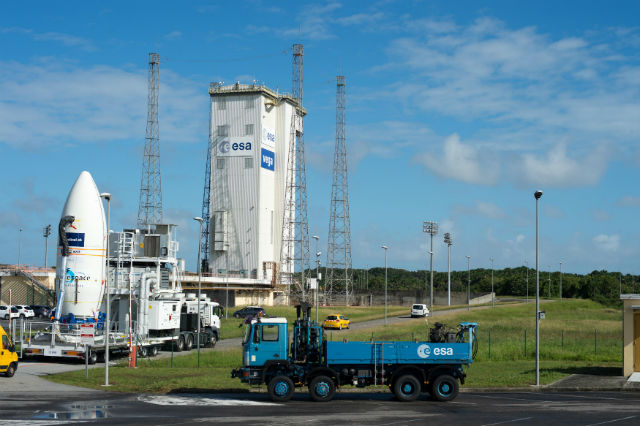 It is difficult to assess the prospective size of the market for small satellite launches, because launch cost is such a critical factor in mission feasibility. The Teal Group consultancy recently forecast launch “demand” for nearly 6,500 satellites to low-Earth orbit up to 2036, but how many of those are so-called cubesats – tiny units, often built by university researchers and flown as secondary or piggyback payloads – is not clear. According to Arianespace senior vice-president for missions Luce Fabreguettes, Arianespace gets lots of enquiries about launches for cubesats and satellites in the 100-200kg class, but for few prospective customers is the finance secure.

Vega C, she says, will be attractive because its greater performance will increase its ability to handle secondary payloads. The increase in size promises to cut the launch cost per kilogram as long as a flight is “full”. To better accommodate multiple payloads, Vega C is getting a “dispenser” that will place small satellites, even cubesats, in precise orbits. There, the competition is on its game; last month, PSLV orbited a record 104 satellites – one Earth imaging unit and 103 secondary cubesats – from one launch.

Meanwhile, she notes, there is prospective competition from so-called microlaunchers such as the vertical-launch Electron from Rocketlabs in the USA and Virgin Galactic’s air-launched LauncherOne, both of which are intended to put a few hundred kilograms into low-Earth orbit. But while Arianespace keeps an eye on the market and may one day want to add to its stable of vehicles, for now it is “not so sure” about the business case for these launchers. The fixed costs remain, she says, so it’s hard to reduce the cost per kilogram.

Philip Hylands of satellite and launcher market analysts Seradata adds that while Electron and LauncherOne have high profiles and great promises, neither has flown yet.

And, he adds, building a business around launching cubesats and other very small units poses risks beyond merely managing launcher technology and operations. Modern technology is making small satellites, even cubesats, increasingly capable, and some of their makers are becoming very professional. But many are neither able nor willing to pay much for a launch, nor can they always be relied on to deliver a flyable satellite on schedule.

Fabreguettes says reusability may be a way to make microlaunchers work, cost-wise. But Hylands urges caution; post-flight refurbishment of the Space Shuttle was so costly that disposable launchers would have been far cheaper, and while SpaceX is widely expected to demonstrate, imminently, its ability to re-use a main stage, promises of actual cost-savings are, for now, just that: promises.

For the types of missions flown by Vega and PSLV there is little competition. The Americans – including SpaceX – and Russians don’t pay much attention to this market, as they get so much business from bigger, government payloads, notes Hylands. China, he adds, is out of the picture because any satellite is likely to have some US content and thus fall under restrictive ITAR regulations. Russia’s Rockot does get some of the business; indeed, the European Commission, which owns Sentinel-2B and its sister orbiters in the Copernicus Earth observation programme, has flown Copernicus payloads on this modified ICBM. Sentinel-2B was originally slated for a Rockot flight, but reliability and scheduling dictated a switch to Vega.

In the minutes after VV09, Renato Lafranconi, ESA’s Vega exploitation programme manager, glowed with excitement at what had happened through a two-month launch campaign and 58min flight: “All the work we’ve done [in development and over the past five years], we’re getting back now.” VV09, he said, looked to be a perfect flight – but a perfect outcome does not necessarily require a perfect flight. There were, he recalls, “some anomalies” with the Avum stage on Vega’s previous flight, but these didn’t compromise the mission. After the flight, it was possible to go back through the huge tranche of qualification data and work out why.

And, he said, because the Vega team did so much work – admittedly with some delays – early and in the early flights, they were really on top of how this launcher was performing. Yes, he said, there was political pressure to fly soon, but a lot of qualification work built a really big database of performance. And, critically, some good decisions were taken early and these have made Vega a robust launcher – something can go off target without being critical. Issues that arise in flight can be managed because there is lots of margin.

That robustness is a theme echoed by Avio’s Bellomi. Post-flight there is a three-month analysis of telemetry data on some 500 parameters. From nine flights, a huge amount has been learned about all aspects of the manufacture and flight campaign of the launcher. As a result, he says, manufacture is improving; VV01 flagged up a “large amount” of anomalies – parts that needed changing during production, for example – but now “we are flying toward ‘anomaly zero’”.

He adds that Avio and its partners are “lucky” to have a succession of projects, with Vega C following closely on Vega. This allows experience to be passed along to young engineers who were not involved from the beginning – an advantage shared by SpaceX, say, but not easily replicated on the 30-year-old Ariane programme. So, he says, Vega C is enjoying a great “continuity” of knowledge.

Vega C, he adds, is also enjoying significant technological advances. Avionics and even vehicle structure are to be dramatically improved with some genuine “breakthrough” technologies and improvements on shortcomings discovered in analysis of Vega’s performance. Manufacturing, too, is getting a boost – Vega C’s part count is much lower, making for a simpler machine. It will, he says, mark a “step ahead” in performance and operability.

Between now and first flight in the second half of 2019 come many critical milestones. In the fourth quarter of this year, the new second stage will be static-fired, and tests will begin on a new carbon composite interstage structure that Bellomi describes as very lightweight and “completely innovative”. Test firing of the P120 main stage will follow in the first quarter of 2018. Of new avionics – which will help increase the validated in-orbit life of the Avum restartable stage to several days from just over two orbits now, promising a huge expansion of mission flexibility – he is confident that the “development style” of Avio and its European partners will deliver. So Bellomi sees Vega C’s first flight not so much as a maiden flight but as the next flight in a series.

Before that flight, naturally, Bellomi and all his partners at ASI, ESA and Arianespace will be wished “good luck” by friends, family and well-wishers. But while everybody in the rocket launching business is of course happy for a bit of good luck, they know all too well that nothing can be taken for granted. Success is absolute – and absolutely unforgiving. 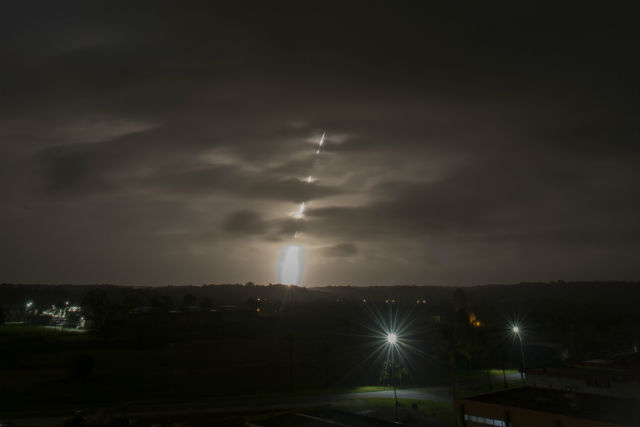