ANALYSIS: Airlines ponder how to capitalise on big data

Every hour, via a host of onboard sensors, a new-generation airliner will record and stream a vast amount of data that would have been unthinkable a few years ago.

But how do operators process and exploit this firehose of information on the aircraft’s real-time performance? In the past 12 months, Airbus and Boeing have launched their own digital platforms, enabling customers to pick through data to predict when parts will need replacing, schedule their flightcrews effectively, and generally ensure their assets spend as little time in the hangar as possible.

However, what has been described as a "turning point" for aviation comes with questions and challenges. Who owns the rights to this data, for instance – the aircraft owner or the OEM providing the analytical tools? What are the dangers of an over-reliance on data? Could it blunt the diagnostic expertise of experienced maintenance technicians, built up over decades? Will the big data surge simply provide too much information – a flood of figures that becomes a wood and trees scenario, impossible to manage and make sense of without an army of data scientists?

These were some of the issues debated at the first FlightGlobal Aerospace Big Data conference. There was consensus – even between Airbus and Boeing – about big data’s revolutionary potential; less so over whether the industry should pool this new-found knowledge for the general good – as it does on safety – or protect and exploit it for competitive advantage.

Speakers from Toulouse and Seattle were there to talk up their respective digital platforms – Skywise and AnalytX – and the boundless benefits of big data. According to Ken Sain, vice-president digital aviation and analytics for Boeing Global Services, digital innovations could drive 10% efficiencies for airlines, the equivalent of introducing a new-generation aircraft type across the whole fleet. 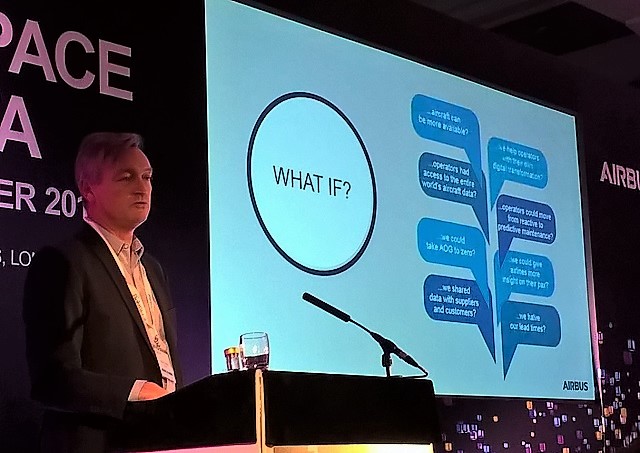 Marc Fontaine (above), digital transformation officer at Airbus, noted that "a virtuous data cycle" was about "improving the efficiency of the whole industry" with everyone benefiting from "maximising the time the aircraft spends in the air".

He and his colleague Matthew Evans, vice-president of digital transformation programmes, floated the prospect of data diagnostics making a goal of "zero AOG" (the time an aircraft is grounded due to a technical fault) achievable during the next decade.

The first step has already been achieved, he says: "We’re already using predictive maintenance as well as diagnostics and health monitoring to drive out unscheduled events." A second phase is imminent, where big data helps remove the need for checks to be governed by set schedules, he adds.

Finally, he expects improvements to maintenance schedules to ultimately eliminate the need for unscheduled grounding of aircraft for fault repairs: “So around 2025 we will achieve that zero AOG goal where you can expect your aircraft to not ever be down because of a mechanical fault.”

However, he believes that final wave will be tougher to achieve, when the maintenance manual becomes "a dynamic document based entirely on that specific tail number, and every check and interval will be based on the operational history of the aircraft". That, he says, will only come "when we’ve accumulated a lot of history, a lot of examples and a lot of confidence from a regulatory standpoint that we really understand the full scope of this".

Airlines represented at the conference expressed differing philosophies on the way big data should be collected, analysed and shared. Safeer Azeez, senior manager information services at Qatar Airways, suggested that OEMs should consolidate and process data from aircraft and then feed the findings back to customers.

One audience member even asked whether the ultimate result of the big data revolution will be that airlines contract out all the management and maintenance of their fleets to manufacturers or third parties, and simply keep responsibility for looking after their customers and brand.

Meanwhile, TAP Air Portugal information manager Joel Ferreira noted that, while the airline is happy to share maintenance data about its fleet with the wider industry, "with operations it is more [commercially] difficult". Ryanair’s data & analytics team leader Marcin Pilarczyk was – perhaps characteristically for an executive of the budget carrier – the most cautious about data sharing, especially with other airlines that do not have a "mature enough" IT system.

The whole question of "who owns the data?" was addressed by several speakers in the panel discussions, with Lufthansa Technik’s vice-president digital fleet solutions, operations Sven Heitsch insisting that "the general rule is that it’s owned by the one that created it, the airline, but it should be an open discussion between the parties".

The concept of big data is not new. Many airlines have been making operational decisions by crunching data from the latest generation of aircraft in a scientific way for several years. Airbus and Boeing worked on their digital platforms for many months before 2017 finally saw their branded launch. However, 2018 could be when the understanding of data analytics’ potential reaches critical mass in the airline industry.