Boeing's extensive use of composites in its 787 airliner and the ultimately cancelled Boeing-Sikorsky RAH-66 Comanche stealth helicopter made it a pioneer in aerospace carbonfibre. But for its most recent aircraft design, the company throws all that fancy material out of the window. Boeing Defense, Space & Security’s T-X – winner of the US Air Force (USAF) advanced jet trainer programme – is an entirely metal aircraft. Despite industry trends, the firm believes that is its strength, however.

The T-X's metal airframe, combined with all-digital design and agile software development processes, make the trainer untouchable on price and operating costs, the company told FlightGlobal during a visit to its St Louis, Missouri production facility in May. "[There is] very little composite. It's basically an all-metal aircraft. [It is] easy to repair," says Paul Niewald, Boeing's senior director and chief engineer for the T-X programme. "From an affordability standpoint, metal and making metal parts for us would be cheaper than designing tooling to make composite parts."

The aircraft is so cost effective, says Boeing, that the company was able to offer a fleet of the jets at a price $7 billion below what the USAF thought possible. In September 2018, the service selected Boeing for a $9 billion contract to produce 351 T-X aircraft, 46 simulators and associated ground equipment. The T-X fleet will replace the USAF's 58-year-old Northrop T-38C Talons. The contract is an indefinite-delivery and indefinite-quantity award, allowing the service to purchase up to 475 aircraft and 120 simulators.

Rival Lockheed Martin, which offered the T-50A trainer in partnership with Korea Aerospace Industries, argues that Boeing's bid is unprofitable. In fact, during the third quarter of 2018, upon winning the contract, the victor recorded charges of $400 million associated with expected losses on the T-X.

The last time Boeing tried to sell the USAF a jet billions of dollars below expectations it ran into some snags. That programme, the KC-46A Pegasus tanker, has lost nearly $3.6 billion. Pegasus was delayed by a year and a half and has had two embarrassing foreign object debris work stoppages since deliveries started less than six months ago, among other issues.

Nonetheless, Boeing argues that its recent T-X trainer contract with the USAF makes financial sense and that this time is different. 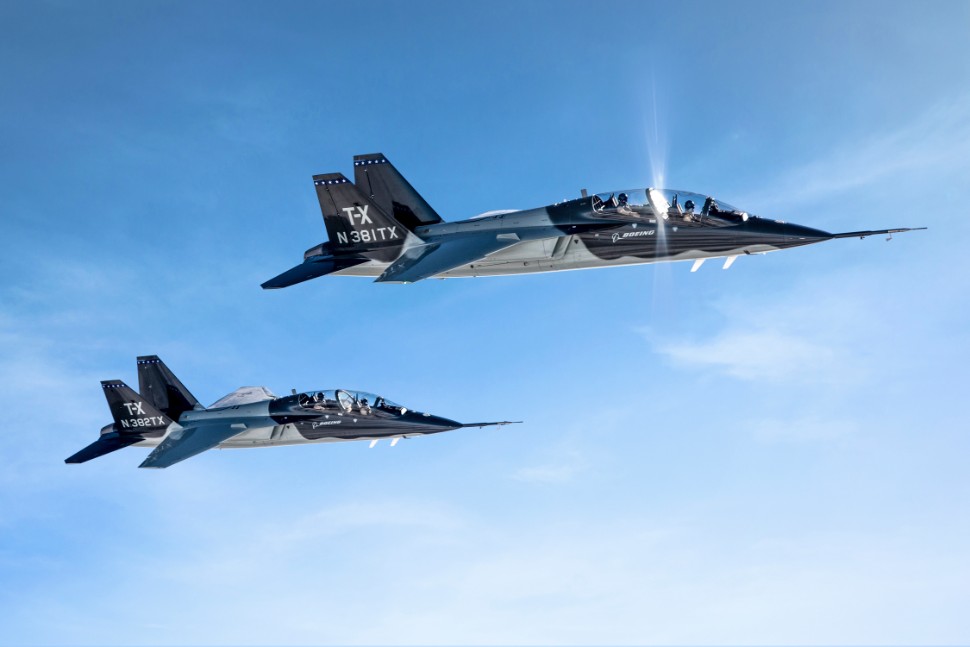 Although Boeing's T-X is made of old-fashioned metal, its design was completed entirely using 3D digital models. The company says it used this method through the entirety of the development process, starting with drafting of the concept. That enabled the design team to co-ordinate its work more efficiently and obtain feedback quickly on aerodynamics and loads.

"Yes, 3D design has been out there, but to be able to put it all together through the process, all the way through production [that has not been done]," says Niewald. "This gave us the opportunity to prove it out and show that it does have time savings, [and] it does have first-time quality impacts."

For example, Boeing boasts that the first two engineering, manufacturing and development (EMD) aircraft were assembled in 80% less time, compared with what the company historically had observed with other early examples. And the time it took to develop a line of code for the T-X was cut in half using agile software development methods, the airframer says. The development programme was able to move quickly and cheaply, says Niewald.

"We went from firm concept to first flight in 36 months. Within 24h of the first flight, we flew the second flight. We flew 71 times before contract award," he says. "Sometimes we flew multiple sorties daily. One time we actually flew four times in one day."

Boeing says the T-X can handle a higher operational tempo, in part, because it is easy to maintain. "We went to school on the T-38: what were the great things about that aircraft and what were the things they wanted to change from a maintenance perspective?" says Ted Torgerson, Boeing T-X senior director. "We worked hard to correct those things." Maintainers helped to design the T-X aircraft, adding features such as large avionics bays, maintenance panels that open with push buttons and high wings that personnel can walk underneath, he says.

Boeing says neither of two T-X test aircraft will be at the Paris air show because they are continuing to work through the EMD programme. The first T-X aircraft and simulators are scheduled to arrive at Joint Base San Antonio-Randolph, in Texas, in 2023. The USAF plans for the trainer to reach initial operational capability by 2024 and full operational capability by 2034.

Boeing downplays its T-X partner Saab's role in the design and manufacturing of the T-X. "We had design authority for the entire aircraft and then we delegated the authority for Saab to do the aft fuselage," says Torgerson.

For his part, Saab chief executive Hakan Buskhe declines to detail the company's likely percentage share of each T-X produced, but notes: "it’s a fairly big portion". The Swedish company recently announced its selection of West Lafayette, Indiana, as the location for its future $37 million US manufacturing facility, from where it will ship completed rear fuselage sections – described as "from the canopy back" – to St Louis for final assembly.

Lars Sjoberg, Saab's T-X programme manager, says it will manufacture the first batch of structures at its Linkoping site in Sweden under an EMD phase subcontract received from Boeing. This will lead to the production of five flight-test aircraft, plus single fatigue and static test examples. Saab cut first metal under this deal in late November 2018.

Sjoberg says that once the airframer's activities in West Lafayette have been established, "90%-plus" of subsystems will be US-produced.

Saab and Boeing believe the T-X has the potential to sell 2,600 units over its lifetime, with around 1,000 examples coming from the US military and the rest from foreign air forces. Both firms decline to name potential future international customers, although Boeing has previously said operators in the Asia-Pacific region, including the Royal Australian Air Force, are seen as possible buyers.

During an October 2018 earnings call, Boeing chief executive Dennis Muilenburg said the programme represented a "$40 billion multi-decade platform and services opportunity". While neither party have disclosed potential marketing allocations, such matters are contained within their joint development agreement on T-X, signed in December 2013, Saab says.

"From a partnership perspective, we will face other markets," says Sjoberg. "We will work together – in some places it's better that Boeing faces the customer, and in other places, it's better for Saab, depending on what country, the situation and what is the experience and relationships." As an example, he notes: "In Sweden, I think it would be better that Saab approach the customer."

Looking at the longer term, Buskhe says a dedicated light-attack development of the single-engined type "probably could be the next step", while noting: "One of the reasons we have been successful is that we have been focused on designing a purpose-built trainer. But of course, there are possibilities to develop this aircraft even more."

Boeing says space in the T-X fuselage was reserved for radar, electronic warfare, radar warning receivers and other combat hardware. Integration of an in-flight refuelling probe and weapons hardpoints under the wings are also being considered, the company says. "We put space, weight, power and cooling into the airplane for that eventuality of growing the airplane into that next aggressor, light-attack aircraft," says Torgerson.

“You can think of the advanced training system as step one, maybe aggressors as step two, and then light attack is step three,” said Jeff Shockey, vice-president of global sales and marketing for Boeing Defense, Space & Security, at the Shangri-La Dialogue in Singapore in May.

In fact, Boeing's long-term goal of modifying the aircraft into a light-attack or light fighter variant puts the T-X squarely within Saab's area of expertise: the Gripen. That light single-engined fighter is the combat aircraft of choice for budget-constrained air forces such as the Czech Republic, Hungary, South Africa and Thailand, while both Sweden and Brazil are acquiring its new-generation E model. In much the same way that Boeing is marketing the T-X, Saab has pitched the Gripen's ease of maintenance to militaries, as well as its low price and operational cost.

"[Competitors] can't touch our costs. We will have all their capability at a fraction of the cost," says Torgerson. "There are a lot of countries that need an inexpensive aircraft and now the USA actually has one to offer them."

Both companies are bullish. "Our expectation is that T-X will be very dominant," Sjoberg says. "It will be a major player."