Long one of the world’s biggest oil and gas producers, the United Arab Emirates has diversified over the past 20 years to become a world leader in the aviation market, a leading tourist destination, and a major trading and financial centre. The one area in which it has arguably lagged – proportional to its economic ambitions and the state of tension across the Arabian/Persian Gulf – has been its indigenous defence sector, relying as it has largely on equipment and expertise from European and US allies.

Long one of the world’s biggest oil and gas producers, the United Arab Emirates has diversified over the past 20 years to become a world leader in the aviation market, a leading tourist destination, and a major trading and financial centre. The one area in which it has arguably lagged – proportional to its economic ambitions and the state of tension across the Arabian/Persian Gulf – has been its indigenous defence sector, relying as it has largely on equipment and expertise from European and US allies.

That could be changing. On 5 November – in a lavish ceremony in the UAE capital Abu Dhabi and attended by dignitaries headed by Sheikh Mohamed Al Nahyan, crown prince of Abu Dhabi and deputy supreme commander of the UAE armed forces – came the formal unveiling of Edge, an “advanced technology conglomerate” bringing together around 25 of the country’s existing defence industrial assets, which cover everything from shipbuilding and repair to missile guidance systems, ammunition manufacturing and military aircraft servicing. The new brand will have a significant presence at this week’s show. 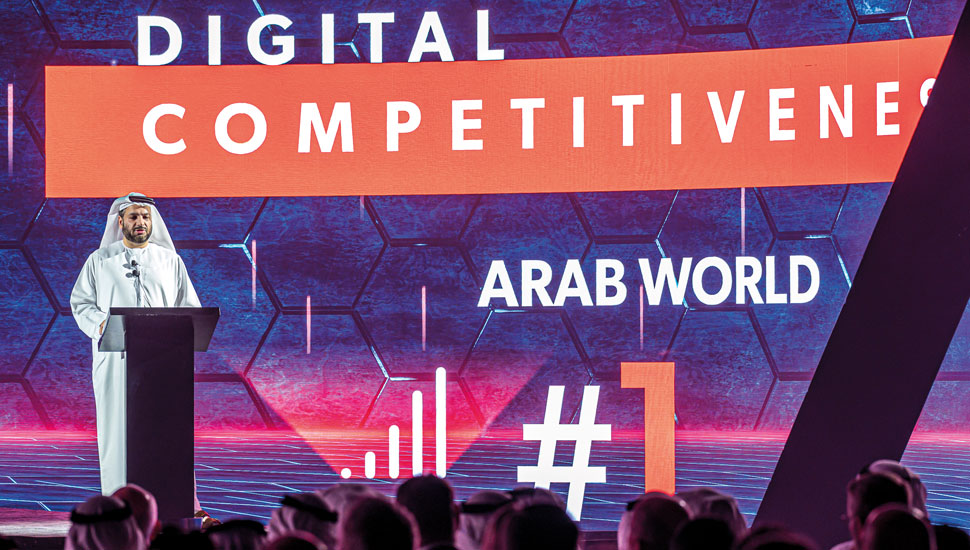 The UAE has been quietly building its defence capabilities over the past two decades, establishing a number of technology and MRO houses, owned either entirely by the government or in partnership with foreign entities. AMMROC, for instance, based at Al Ain in the emirate of Abu Dhabi, is a repair facility for military aircraft, jointly owned with Lockheed Martin and the only C-130 service centre in the Middle East and North Africa approved by the US company.

The integration of the businesses – previously grouped under entities such as Emirates Defence Industries, Emirates Advanced Investments Group and Tawazun – is described as “phase one”. The long-term aspiration is to create a “disruptive presence” in the defence sector, by investing further and nurturing home-grown talent, says Faisal Al Bannai, who has been appointed chief executive of the new organisation. There will be a “priority on national security”, but Bannai also wants to work with international partners and engage in the export market.

“Edge will invest extensively across R&D, working closely with front line operators to design and deploy practical solutions that address real world challenges,” says Bannai, who has a background in successful technology start-ups. He founded Axiom Telecom, a mobile phone company, in 1997 – and went on in 2014 to set up DarkMatter, an Abu Dhabi-based cyber security company, although that business is not one of those being integrated into Edge.

The conglomerate has been set up to address what the UAE sees as changing national security needs, with the aim of developing products rapidly to counter emerging and future threats. Speaking at the launch ceremony, Al Bannai gave the example of the September attacks on neighbour Saudi Arabia’s oil installations, for which the Iran-backed Yemeni Houthi group claimed responsibility. “Simple drones” costing less than $10,000 knocked out half the production at one of the world’s largest oil facilities, he said. “There is little doubt that these are the future threats we face.”

The defence sector “has yet to embrace the same speed of commercial companies when it comes to innovation”, he says. Edge will be a “new kind of defence company, bringing advanced technologies to the market with great speed and efficiency”. He adds: “The solution to address hybrid warfare lies at the convergence of innovations from the commercial world and the military industry. Established with a core mandate to disrupt an antiquated military industry generally stifled by red tape, edge is set to bring products to market faster and at more cost-effective price points.”

Edge’s 25 legacy organisations, which employ a total of 12,000 people, will be grouped in five “clusters”: platforms and systems; missiles and weapons; cyber defence; electronic warfare and intelligence; and mission support. Many of the businesses – such as NIMR, which produces land vehicles, ammunition maker Lahab, and small arms manufacturer Caracal – are unlikely to be familiar to a general aerospace audience. However, several have a higher profile in the aviation market.

The platforms and systems division, for instance, includes AAMROC and ADASI, whose Aquila unit, based at Al Bateen airport in Abu Dhabi – and an approved Bombardier service facility – was last year awarded a contract by the UAE armed forces to adapt a Challenger 650 for a maritime patrol role. The converted business jet, which will be fitted with sensors, operator stations, observation windows and air operable doors for missions including maritime surveillance, search and rescue, medical evacuation, and command transport, will be delivered next year, with a contract for a second aircraft due to follow.

Also part of the mission support cluster is helicopter training operator EDIC Horizon. Originally part of the Horizon Flight Academy, the fixed wing part of the business came under the control of Etihad Airways in 2014 as the flag-carrier looked to focus on the instruction of its own cadet pilots. The helicopter operation, which provides training to military and commercial customers across the Middle East and North Africa, has an all-Bell fleet with 429, 407 and 206 Jet Ranger types as well as flight simulators.

While “Emiratisation” – the drive to develop career paths for the country’s young citizens and lessen the reliance on expatriate skills – has been a key strategy for all UAE-owned companies for the past decade or so, Bannai is realistic. “There is not enough indigenous talent in this specialised field,” he says. “We need to attract the best minds from around the world. The UAE stands among the leading nations in being able to attract the best talent.”

The defence industry is changing. The UAE is unlikely to be vying to join the top tier of global defence producers, with their decades of experience delivering aircraft, ships and land vehicles, as well as other hardware and software, to their domestic and foreign governments. However, the nation’s ability to import expertise, its deep pockets, and the growing importance of areas such as artificial intelligence and autonomous control, mean that creating a nimble, home-grown defence technology sector, able to compete globally, is not unrealistic.

Small countries such as Israel and Singapore have managed it, helped by robust defence budgets and the need to come up with swift solutions to constant threats to national security, as well as generations of investment in education and R&D. The UAE is determined to get there even quicker.