Cirrus grounded its global fleet of more than 170 SF50 Vision Jets on 7 February, and issued a mandatory service bulletin (SB) to all owners of the single-engined aircraft, after identifying faulty audio amplifier circuit cards as the cause of a 27 December cabin fire.

The US Federal Aviation Administration (FAA) issued an emergency airworthiness directive on 14 February instructing SF50 operators to comply with the service bulletin, but Cirrus says 97% of owners had already done so within a week, and their aircraft have now returned to service. 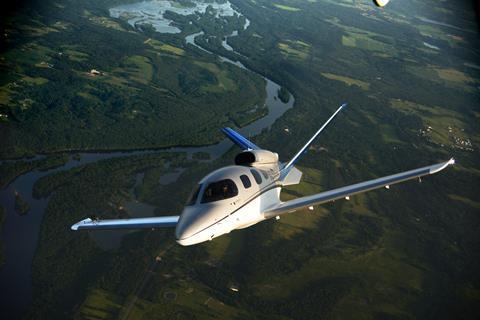 The remaining 3% of SF50 operators “have yet to comply with the SB”, it notes.

The cabin fire occurred while a SF50 was on the ground in Santa Monica, California. Cirrus says the “probable root cause” was a malfunction of the audio interface circuit card which can result in excessive heat generation.

“There are 12 of these cards on the SF50, all of which are located in the cabin,” says Cirrus in a 7 February letter to its customers. These cards provide the audio and microphone functions to the 3.5mm jacks located next to the passenger USB ports in the cabin. Cirrus stresses that these are not the audio/mic jacks for the aviation headset.

“This issue will be resolved by removing the 12 circuit cards in the aircraft,” says Cirrus.

“It affects every SF50 in operation and needs to be complied with immediately. This means no flights are permitted - other than special flight ferry permit flights until the 12 circuit cards have been removed from the aircraft.”

In its directive, the FAA says the issue, if not addressed, ”could lead to uncontained cabin fire, resulting in possible occupant injury or loss of airplane control”.

The work can be performed at Cirrus’s factory and authorised service centres, and as well as “in the field” using Cirrus mobile service teams.

“Operating the aircraft without these 12 circuit cards causes minimal loss of functionality – just the mic/audio capabilities of the smaller 3.5mm jacks throughout the cabin which are rarely used,” says Cirrus.

Early in the investigation, the Duluth headquartered manufacturer says it issued a service advisory and a service bulletin which called for disabling the in-flight entertainment system, USB ports, convenience lights and power outlets in cabin. “We did this out of an abundance of caution as we worked through the early stages and initial feedback of the investigation”, says Cirrus.

These “convenience systems” can be enabled as part of the mandatory SB, says Cirrus.