Blue Bear Systems and the University of Bristol have introduced a new concept that automates unmanned air vehicle flight for use in challenging conditions.

Dubbed Smart Boomerang, the system comprises two cameras and a mobile phone-derived computer that enables UAVs to learn a route and be able to automatically retrace its path.

In certain conditions – such as when GPS is lost, when the UAV is indoors or where minimal operator control is required – Smart Boomerang would provide a retraceable route for the UAV so it could return safely.

The system creates a “point cloud” of objects on the UAV’s route, and uses these to retrace it. Eventually an obstacle avoidance feature will be added to the system, although the team is focusing on the navigation side at the moment. 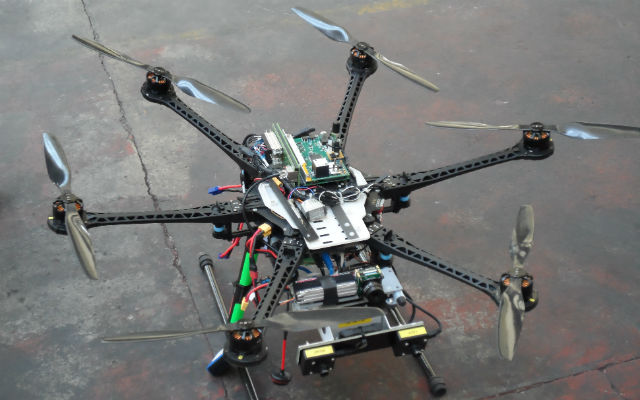 “On its first path it learns, and on its second it uses points identified to navigate,” says Richard Bostock, project manager and technical lead for the programme at Blue Bear.

The system is currently in a proof of concept stage, but the company held a customer demonstration on 17 September to rouse interest, using Smart Boomerang integrated on to a commercial vertical take-off and landing UAV.

Interested parties included BP, EasyJet and the Sellafield nuclear site. EasyJet could potentially use such a system to monitor aircraft in a hangar to check for abnormalities, comparing data points against previously collected data on what configuration the aircraft should be in.

“It’s all about time, money and risk,” Bostock says. “We’re trying to get the proof of concept for this technology at this point – we aren’t yet trying to create a product."

The principle behind the concept is designed to be adapted for the provision of high-resolution mapping for industry. Nuclear plant mapping is expected to be the first commercial application, resulting in the development of a product.

The team has been working on Smart Boomerang for 12 months, and will now focus its effort on refining the system, as well as reducing operator interaction with the product.