Google is continuing its journey into the world of unmanned air vehicles (UAVs), as it introduces a parcel-delivery UAV prototype developed under its two-year Project Wing effort.

The technology company is developing the concept through its Google X research division, and the announcement follows on from the company’s April 2014 acquisition of Titan Aerospace – a high-altitude, long endurance (HALE) solar-powered UAV manufacturer. 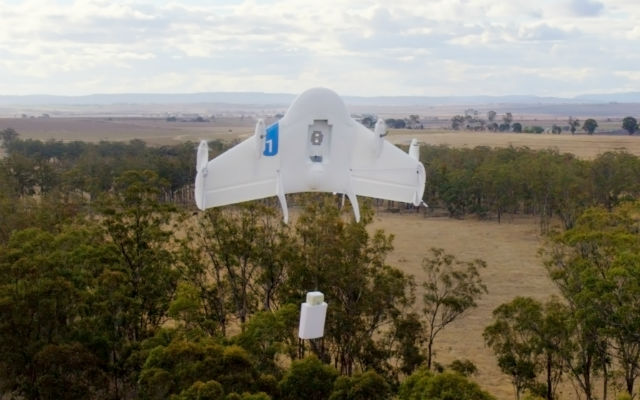 Testing took place in Australia as recently as two weeks ago, during which first aid kits and food were delivered to Australian farmers.

In the video the fixed-wing prototype (pictured above) is shown to make a controlled drop of the parcel from a height using a tether, and so far Google says the development has “resulted in a reliable system that can do autonomous delivery”.

Google admits it is “years from a product”, but is confident in this first prototype, which it describes as more akin to a driverless car – which Google is also researching – than to other remote-controlled UAVs.

Dave Vos, the founder of Athena Technologies - a company that developed control software for UAVs and was purchased by Rockwell Collins in 2008 - has been named as lead on the project. The next stage of Project Wing will see Google X working to prove a UAV can quickly and safely deliver items.

The company’s announcement is timely, following Amazon chief executive Jeff Bezos’ announcement in December 2013 that his company was looking to enhance its Prime delivery service with the use of UAVs.

The company showcased a video of a vertical take-off and landing UAV (pictured below) that would deliver parcels to customers’ doorsteps.

Amazon went so far as to send a letter to the US Federal Aviation Administration in July calling for an exemption on current airspace restrictions, so that Amazon Prime Air could become a reality.

The Association for Unmanned Vehicle Systems International (AUVSI) – which lobbies for the unmanned industry – threw its support behind Amazon’s effort, sending its own letter to the US Department for Transportation on 26 August calling for the company to be allowed to test its system.

“We hope the FAA uses any and all means to allow Amazon to test their systems domestically in a safe and responsible manner,” the letter says.

The FAA was mandated in 2012 to open up US airspace to allow for UAVs to be operated alongside manned aircraft, under the FAA Modernization and Reform Act. The deadline is 2015, although it is widely understood that this is unlikely to be met.

However, Congress included section 333, which allows the Secretary of Transportation to grant that “certain [UAVs] may operate safely in the airspace before the FAA finalises rules for widespread commercial use of small [UAVs]”, AUVSI says in its letter.

This means an exception could be granted – and Amazon would be allowed to start testing its prototype.

Google’s acquisition of Titan was aimed at developing a HALE aircraft that could affordably replace satellites on localised missions.

Social networking site Facebook’s founder Mark Zuckerberg was also reportedly interested in acquiring Titan, although in March he announced the company was instead looking to develop its own HALE UAV. The Facebook aircraft would operate for long periods of time, providing broadband services to remote areas.

Zuckerberg acknowledged that HALE UAVs are not restrained by airspace regulations because they are positioned at such a high altitude. The weather at 65,000ft is stable, so they can operate without being disturbed.