Building on the experience gained on previous variants, the Falco Xplorer is the largest UAV the Italian company has ever produced.

Although the unit at the show is a full-scale replica, one aircraft has already been manufactured in Italy and another is in the final production stage. 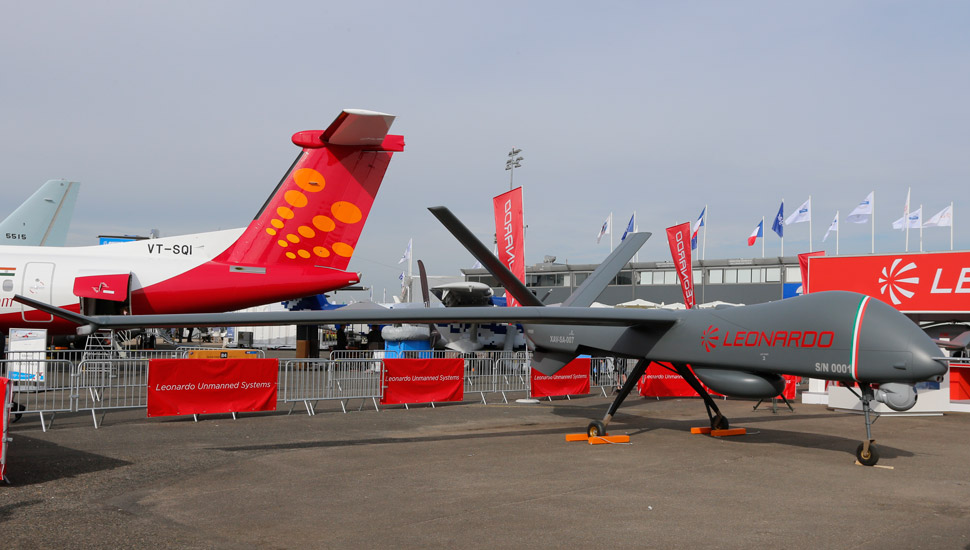 Leonardo says the UAV can fly for 24h and with a satellite communication capability, it is capable of beyond-line-of-sight operations.

A maiden sortie is expected later this month, with flight trials taking place in Trapani, Sicily, leading to a test campaign that includes the platform's integrated sensor suite.

Certification is expected by year-end, according to Fabrizio Boggiani, Leonardo's senior vice-president of airborne sensor and mission systems.

No launch buyer has been disclosed, but Boggiani says the company is "talking to customers around the world".

Leonardo is keen to replicate the success of previous service-based contracts, which has seen smaller Falco models utilised by the UN's MONUSCO mission in the Democratic Republic of Congo and Frontex, the European border and coastguard agency.

"This is going to be another way that we can be a partner with our customers and expand our market share," says Boggiani. "This service model, we expect to be very significant and we are ready to address this need with the Xplorer."

Leonardo would operate the aircraft and sensors, as well as handling logistics, to ensure actionable intelligence is collected and presented directly to the customer.

Despite its size, officials point out that the UAV is not a medium-altitude, long-endurance platform and remains at the tactical end of the spectrum with a 1.3t maximum take-off weight.

Exportability is aided by its size and European origins, ensuring it is outside the scope of the International Traffic in Arms Regulations.

Like the General Atomics SkyGuardian, Leonardo is aiming for certification that will allow the Falco Xplorer to be integrated into non-segregated airspace.

Boggiani says the Xplorer features one of the most powerful combinations of capabilities from flight and mission perspectives.

With the ability to carry a 350kg (770lb) payload, it integrates a Leonardo-developed Gabbiano T-80 surveillance radar, LEOSS electro-optical turret, SAGE electronic intelligence system on its wing-tips, and an automatic identification system for maritime roles. Third-party sensors can also be added.

Leonardo's original Falco was selected by five nations, and including the follow-on Falco EVO, more than 50 systems are now deployed around the world.