Raytheon is confident the enhanced moving target-tracking seeker it is developing for its Paveway IV laser-guided bomb will be adopted by the UK Royal Air Force, but anticipates this will not happen until a new penetrating warhead has been integrated onto the service’s weapons.

Under a £25 million ($38 million) contract signed in September, Paveway IVs carried by the RAF’s Eurofighter Typhoons are to receive the new reconfigurable “compact penetrator” warhead by 2019.

Work on the warhead is being conducted by Raytheon and Qinetiq, and will be produced by Rheinmetall Italia, using a Thales-produced Aurora fuse. The programme comes under the UK Ministry of Defence’s selective precision effects at range (SPEAR) capability 1 plan for the munition.

At the same time, Raytheon is developing a new seeker and guidance system under the USA’s P3I programme, which also looks to reduce production costs through electronics efficiencies. The UK has expressed interest in the upgrade but is likely to observe the P3I development before committing to it. 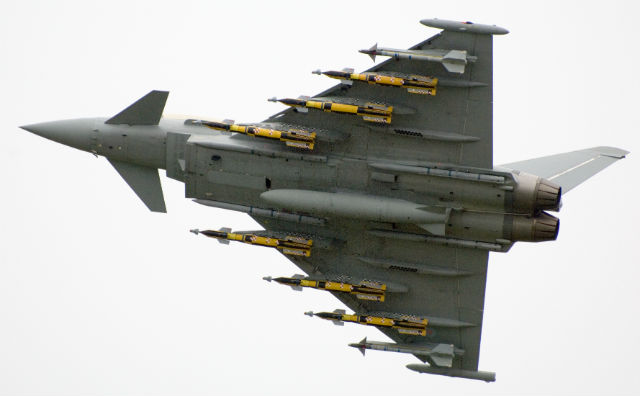 Further target markets for the Paveway IV include integration on board the Lockheed Martin F-35 and the General Atomics Aeronautical Systems MQ-9 Reaper unmanned air vehicle.

Trials of the weapon aboard the Reaper were planned, but there is no confirmation of whether the evaluations have taken place.