Beijing air power turns up the heat on Taiwan

The J-16 has figured prominently in incursions against Taiwan

Taiwan’s defence ministry assiduously details every incursion on Twitter, showing the aircraft involved, the course they flew, and the actions taken by Taiwanese forces. If 2020 was a challenging year for incursions, the recent appearance of large Chinese formations means 2021 looks set to surpass it.

J Michael Cole, Taipei-based senior fellow with the Global Taiwan Institute in Washington, DC, says that Beijing rapidly increased sorties in January 2020 following the re-election of Taiwanese president Tsai ing-win, who has frosty relations with the Chinese Communist Party (CCP). Beijing is also irritated by the increasing number of visits by senior US officials.

“This isn’t solely a reaction by Beijing to visits by senior US officials to Taiwan, but also a demonstration to domestic constituents in China that the CCP is doing something, and that it, not Taipei, gets to set the tone,” he says. “No doubt this stems in part out of frustration that Beijing’s policy of ‘peaceful unification’ has been an abject failure.”

He adds that the flights can be seen as a form of “psychological warfare” calibrated to intimidate Taiwan’s population.

Analysts tend to agree that a major objective of the incursions is about making them seem commonplace. Once such incursions are deemed routine, a sense of acceptance, if not downright complacency, could well set in.

Although incursions by a handful of aircraft are an almost daily occurrence, Beijing recently mounted two major sorties that generated news headlines. 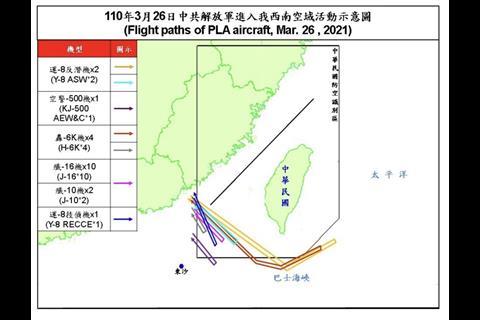 The 26 March incursion of 20 aircraft 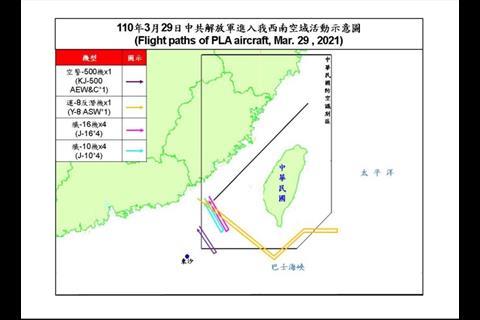 The 29 March incursion of 10 aircraft 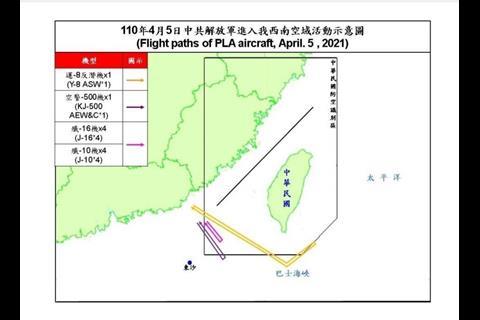 The 5 April incursion of 10 aircraft 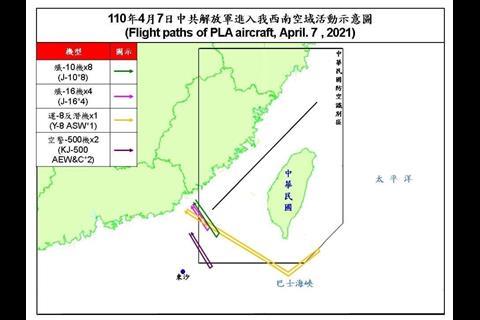 The 7 April incursion of 15 aircraft 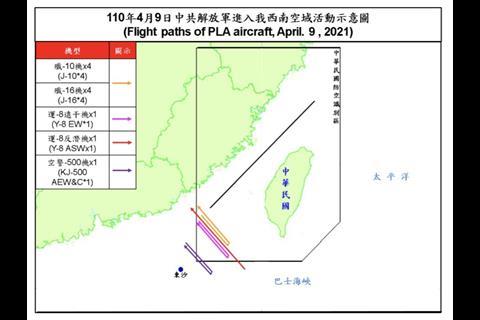 The 9 April incursion of 11 aircraft 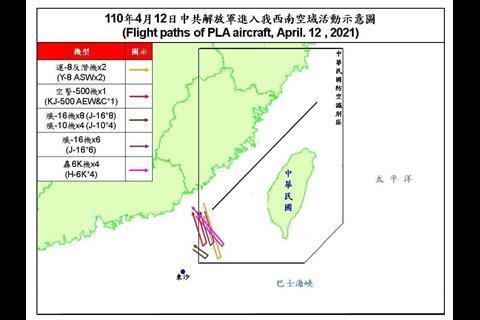 The 12 April incursion of 25 aircraft 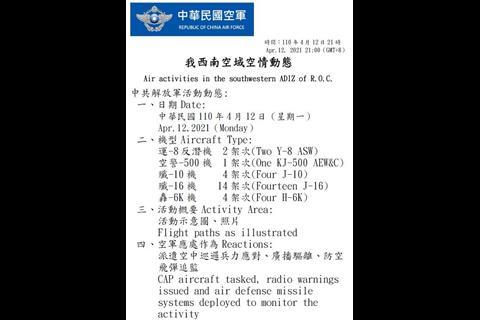 The ROCAF announcement about the 12 April incursion

The sortie was notable in that some of the H-6Ks and one of the Y-8 ASW aircraft flew well beyond the southern tip of the island, before taking a north-easterly route. This effectively bracketed the island. Taiwan defence analyst Kitsch Liao notes that a sensitive Taiwanese missile testing area is located on the island’s southeast coast.

After a few weeks of smaller incursions, on 12 April Beijing mounted an even bigger sortie. This involved 25 aircraft comprising 14 J-16s, four J-10s, four H-6Ks, two Y-8 ASW aircraft, and a single KJ-500. Though this sortie involved more aircraft, the scope of the mission was more modest than on 26 March, as it did not include any aircraft making a dogleg around the southern tip of Taiwan.

Much has been made of the sorties’ potential impact on Taiwan’s Republic of China Air Force (RoCAF), especially if it scrambles aircraft – generally Lockheed Martin F-16s – to meet every interloper.

Defence analysts think this concern is probably overblown, in that Taiwan already conducts regular training flights. In any case, Taiwan might not be sending planes to intercept every incursion – although its Twitter updates invariably state that a combat air patrol was tasked, along with the issuance of radio warnings and “missile systems deployed to monitor the activity”.

Roderick Lee, research director at the China Aerospace Studies Institute (CASI), points out that in 2020 Taiwan’s defence ministry started exclusively using file photos of Chinese aircraft, as opposed to imagery taken during the interception in question.

“Assuming the RoCAF has indeed stopped intercepting most of these PLA flights, the decision to stop is smart,” says Lee. “The RoCAF is never going to be on the winning end of this readiness competition and trying to keep up with PLA flights would accomplish little besides the optics of defending the homeland. That is until they can’t fly any more because their pilots are exhausted, and their aircraft are grounded.”

In regard to the unvarying course of most of the Chinese incursions – southeast from the Chinese coast – he feels that this likely relates to the PLA’s Eastern and Southern Theatre commands. Given that Taiwan is in the area of operations for the Eastern Theatre Command, he suspects a requirement to stay within certain boundaries. 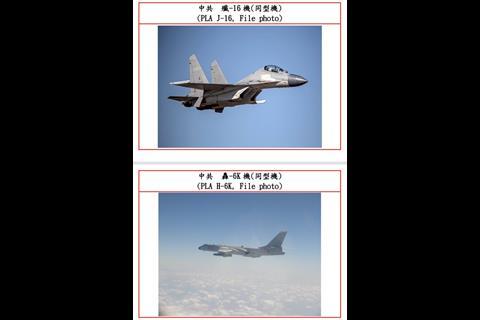 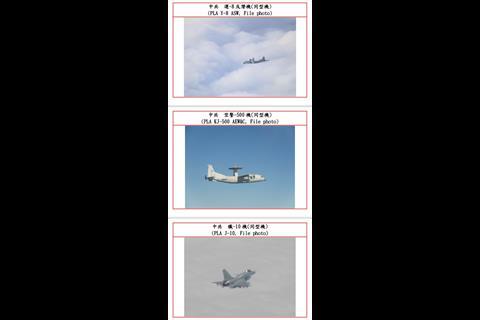 Apart from attempting to cow Taiwan’s population, the flights also offer a valuable opportunity for PLAAF and PLAN pilots to test their skills over water. Given the nature of any prospective Taiwan military campaign, the ability to operate in a littoral setting will be essential for success. A history of the PLAAF recently published by CASI notes that the service is eager to improve its ability to operate over water.

“In order to keep advancing in the maritime domain, the air force has overhauled training for its pilots to be better prepared for operations over water, including those farther from shore,” it says.

Beijing’s bombastic Global Times newspaper has a more menacing take. In a 13 April story about the 25-aircraft mission a day earlier, it stated that the exercises are nothing short of a rehearsal for war, sending a warning to the “Taiwan secessionists” and the USA.

Despite recent warnings from US admirals about the threat China poses against Taiwan, war does not seem imminent – irrespective of the aerial incursions. Mustering the massive forces necessary for an amphibious invasion of Taiwan would take time and attract attention from foreign intelligence services. Should the USA and Japan be drawn in, the resulting war would likely be the defining conflict of the 21st century.

Nonetheless, Liao sees incursions such as 13 April’s 25-aircraft effort as major exercises. He notes that the combination of J-16s and J-10s is a strike package, whereby the big, twin-engined J-16 would provide aerial supremacy while the J-10s struck targets. This reflects Israeli practice, where Boeing F-15s provide air cover while F-16s perform strikes.

Liao warns that Beijing’s increased aerial incursions raise the stakes, creating more opportunities for miscalculation. Moreover, he is concerned that there is no clear path for de-escalation. “This is going to be increasingly dangerous.”