The Block III version of the Chengdu/Pakistan Aeronautical Complex JF-17 fighter has conducted its maiden flight, and China appears to be making progress with indigenous engines for the J-20 stealth fighter. 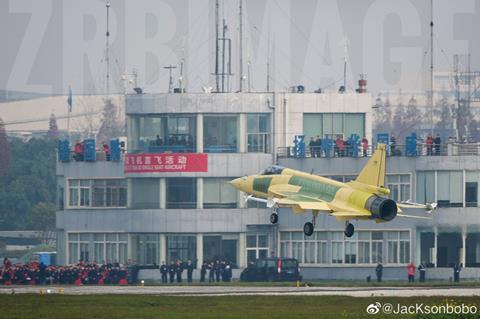 The JF-17 Block III takes off on its maiden sortie.

On 27 December 2019 images emerged of the JF-17 Block III taking flight from AVIC’s production centre in Chengdu. One image showed the jet taking off before a group of seated VIPs, with a banner celebrating the event hanging from a building.

At the Paris air show last June, an official with the programme said the first flight of the Block III would occur before the end of 2019.

Visually, it is hard to detect many differences between earlier versions of the JF-17 and the new Block III. One notable difference appears to be a considerably larger heads-up display similar to that observed on the J-20.

In addition, there appear to be the addition of a radar warning receivers aft of the aircraft intakes and on the tail. At Paris, the programme official said a key structural difference with the Block III would be a larger intake. In early images of the Block III, however, the intake appears similar to the Block I and II.

Irrespective of appearances, the most profound change for the new version will be the addition of an active electronically scanned array (AESA) radar. As of June 2019 the type of radar had yet to be decided, but FlightGlobal understood that two were in contention: the China Electronics Technology Group KLJ-7A, and an AESA from AVIC that it claims is the first air-cooled example. 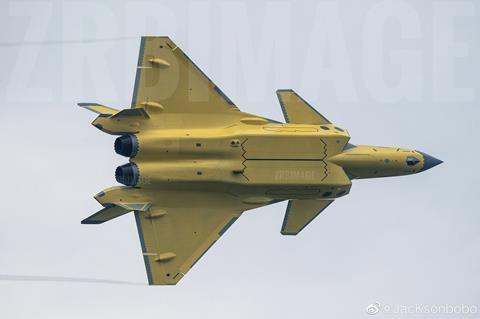 The WS-10 engines can be distinguished by the saw-toothed design of the exhaust petals.

Separately, images emerged of a pair of new J-20s apparently powered by the Shenyang WS-10 Taihang engine, as opposed to the upgraded version of the Saturn AL-31 that powers most examples . The WS-10 – which also powers the Shenyang J-11B, an Su-27 clone - features saw-toothed exhaust petals, whereas the AL-31 has flush exhaust petals. Internet observers believe that only four WS-10 powered J-20s have been produced.

The definitive powerplant for the J-20 is understood to be the more powerful Xian Aero Engine WS-15 Emei, but the timeline for its integration and testing is not clear. 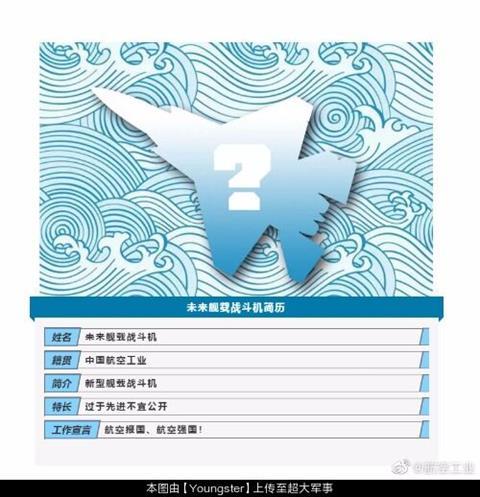 The mystery aircraft profile posted by AVIC on Weibo.

Coinciding with the JF-17 and J-20 news, AVIC’s Weibo account published the outline of a stealthy aircraft resembling the developmental FC-31, with a reference to the recent commissioning of Beijing’s second carrier, the CNS Shandong. In Chinese, the caption states “brief introduction to future shipborne fighter.”

The status of the J-31/FC-31 is unclear, but there has been speculation that it will be developed as a carrier-based fighter – there is similar speculation about the larger J-20. Chinese carriers currently operate the J-15, a copy of the Sukhoi Su-33, but reports suggest that the navy has suffered reliability and safety issues with the type.