Romania is to acquire Watchkeeper X tactical unmanned air vehicles (UAVs) for its army via Elbit Systems, under a deal worth around $410 million.

“The framework agreement… has a duration of five years and aims to award subsequent contracts for the supply of a maximum of seven Watchkeeper X systems,” the Romanian defence ministry announced on 20 December. 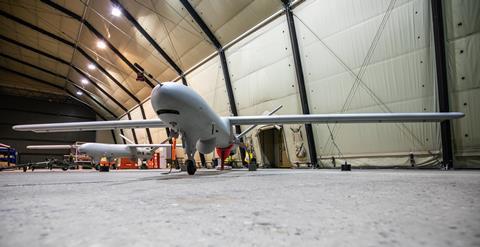 The Romanian army will field up to seven Watchkeeper X systems

Watchkeeper X is the export variant of the British Army’s in-service tactical unmanned air system, first flown for the UK in 2010. The air vehicle is a further development of Elbit’s Hermes 450 design, supplied by the UAV Tactical Systems (U-TacS) venture between the Israeli company and Thales.

The export deal includes a substantial workshare package for local industry, Bucharest notes. “Starting with the first system, the production of the structure of the aerial platform and of the ground command and control station container, as well as electrical and mechanical components, will be carried out on the territory of Romania.

“Starting with the third system, the production of all electrical and mechanical systems will be carried out in Romania,” it adds. “At the same time, complex-level maintenance operations” also will be performed in the country, “so that in crisis and war situations it is not necessary to perform these operations outside the national territory”.

“As part of the contract execution, Elbit Systems plans to establish infrastructure and industrial cooperation with U-TacS, Aerostar and Elbit Systems’ subsidiaries in Romania to produce the UAS in Romania,” says Elbit chief executive Bezhalel Machlis. 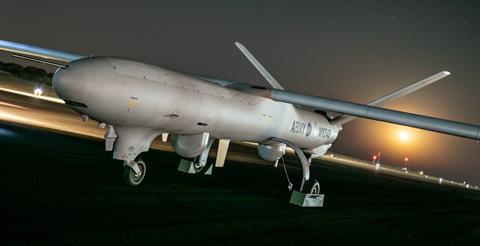 The British Army details the almost 500kg (1,100lb) Watchkeeper air vehicle as having a maximum flight endurance of 14h, at an operating altitude of 16,000ft. In UK service it carries a twin payload comprising an electro-optical/infrared sensor and Thales I-Master ground-surveillance synthetic aperture radar.