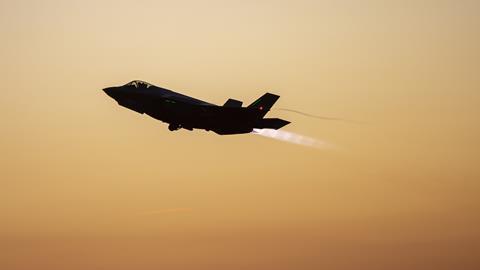 RAAF F-35s on the rise Down Under

Wing Commander Darren Clare leads the RAAF’s 3 Sqn, based at RAAF Williamtown, New South Wales, where it is steadily building capability and understanding of the new type. 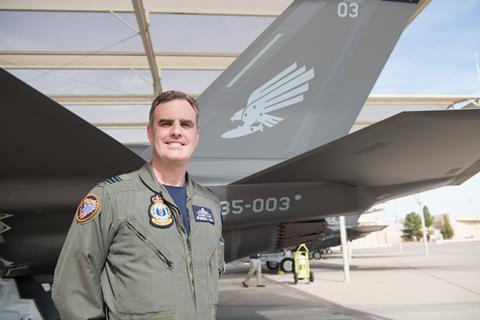 3 Sqn operates 12 F-35As out of the 17 examples permanently located in Australia. The other five are with the air force’s 2 Sqn operational conversion unit (OCU), also located at Williamtown. Canberra’s five other F-35As and seven instructors remain at Luke AFB, Arizona, where they are part of the F-35 programme’s international training effort.

Another four F-35As will be ferried to Australia sometime in late July. Ultimately, Canberra has plans to obtain 72 F-35s, which could eventually rise to 100.

According to Australia’s Department of Defence (DoD), its F-35s are cleared to employ a “suite of air-to-air and air-to-ground weapons”. These include the Raytheon AIM-120 AMRAAM and AIM-9X, as well as laser- and GPS-guided bombs. Also cleared is the internally-mounted GAU-22 25mm cannon. Final operating capability will come when the RAAF has three operational units – also including its 75 and 77 squadrons –  supported by the OCU. Overall, Australia’s F-35 fleet has flown over 6,500h.

Clare manages to get into the air with the F-35 about three times per week. Earlier in his career he flew both the Boeing F/A-18A/B “Classic” Hornet, and the F/A-18F Super Hornet. When asked about his favourite, he clearly has a soft spot for the original Hornet – which the F-35A is replacing – but appreciates the greater capability afforded by the new type.

“The Classic fits like a glove and is the one that I’ve put the most hours on,” he says. “But if I thought I was going to be heading into combat these days, I wouldn’t want to be in anything besides an F-35. It’s quite an amazing machine.” 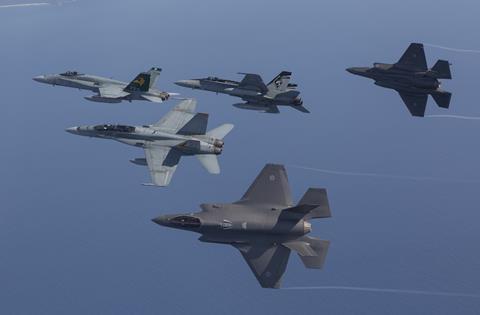 Clare has high marks for the F-35’s handling characteristics. Some changes that require getting used to are using the helmet-mounted display as opposed to a head-up display, the different locations of various switches and buttons between Boeing and Lockheed jets, and adjusting the menus on the aircraft’s touchscreen display.

The move to the more capable, stealthy F-35A has involved some tactical changes. Operating the original Hornet placed a greater emphasis on the tactical formation, with activities such as operating sensors taking a more secondary role. And since not all the sensors were integrated, different pieces of information would reach the pilot from various origins, such as the radar, radar warning receiver, and sensors on other aircraft.

Clare says sensor integration improved when he moved to the Super Hornet, but has been fully realised on the F-35A. This means F-35s operate at a greater separation, with fused tactical information on one screen. The pilot does not necessarily know which sensor is producing a piece of information, but it is easy to find out if necessary.

“Changing to a stealthy aircraft sort of changes your mindset in tactics. When I grew up flying the classic Hornet, we’re basically shooting AIM-7 [air-to-air missiles] and dropping some laser-guided bombs and that was about it. Tactically [an F-35 pilot] is more a battlespace manager – rather than fighting in a phone booth. We do BFM [basic fighter manoeuvres] and dogfighting, but we obviously try not to get there in the first place. You’re managing your sensors, managing formation, and you’re managing your signatures. With the stealth aircraft, I can be in a position that I couldn’t be with my F-18 doing certain things, but I want to make sure that I don’t give the game away unnecessarily.”

The F-35’s datalinks are consistent with the RAAF’s “Plan Jericho” initiative to better connect platforms across the Australian military. Jericho was launched by former Air Marshal Geoff Brown in early 2015. Brown foresaw air force operations changing radically, relying on data from a range of platforms. 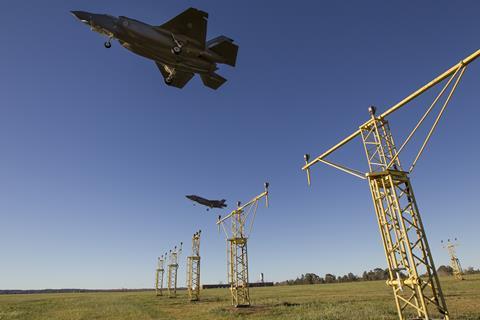 Another big change for pilots converting from the Hornet and Super Hornet is that the F-35 conducts air-to-air refuelling via a boom receptacle located on the upper fuselage behind the pilot. This differs from the F/A-18 family, which use the hose-and-drogue method with a refuelling arm located in the aircraft’s nose ahead and to the right of the cockpit.

“Previously I was in control,” he says. “The basket might have been moving around, but I was the one in control of when I was actually going to engage the basket, plug in and get the fuel. Once you’re in [the basket] it is easier to stay there.”

Boom refuelling requires carefully flying in formation with the tanker overhead. Still, RAAF crews are familiar with the new technique. Long delivery transits from the USA to Australia across the Pacific Ocean afford ample opportunities to practice air-to-air refuelling. “It requires a little bit more attention to stay in the right spot so the boom does not have to work too hard,” he says.

Clare dismisses a concern raised by some observers that the boom might accidently scratch the aircraft’s stealthy skin, which could theoretically compromise the type’s signature. He points out that the receptacle is located under “a couple of doors”, so while there could be metal-on-metal scratching from the boom connection, when the “doors close up you’re fine again”.

Considerable work has also gone into working with the RAAF’s three other premiere platforms: Super Hornet, EA-18G Growler, and the Boeing E-7A Wedgetail airborne early warning and control aircraft. Clare notes that since the RAAF is a relatively small air force it is easy to work with colleagues in other aircraft communities.

While the RAAF still has a strong presence at Luke AFB, shifting the majority of its training to Williamtown earlier this year changed the centre of gravity for the force’s F-35A activities. All maintenance training is now undertaken in Australia, and the pilot conversion course has already produced new pilots. 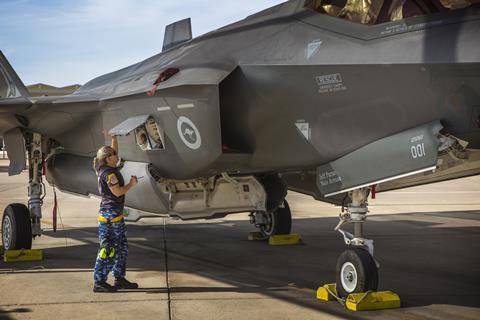 An RAAF maintainer inspects a maintenance control panel on an Australian F-35A on the flight line at Luke AFB, Arizona

At Luke AFB, RAAF maintainers were able to observe and learn from Lockheed personnel working on the international fleet there. In Williamtown, RAAF personnel maintain the aircraft with support from Lockheed field representatives. Maintainers come not just from the Hornet community, but from the full range of types in the service’s inventory. Senior maintainers even have experience on legacy types such as the General Dynamics F-111, retired in 2010, and the Boeing 707 tanker, retired in 2008. This experience is backed up by the Lockheed team.

“Some of [the Lockheed personnel] have been on the programme for a long time and been at the factory at Fort Worth for quite a while, so they provide understanding of the system,” says Clare. “When my team’s got questions about a maintenance procedure, they receive expert advice.”

The Australian DoD acknowledges that there are challenges with the F-35 programme’s Autonomic Logistics Information System, but it is positive about the F-35 Joint Program Office’s plan to create the new Operational Data Integrated Network system. It feels this will simplify maintenance, be cheaper to maintain, and be easier to upgrade.

Clare stresses that Australia’s F-35A experience has been a profound team effort.

“We’ve done a lot of training and continue to do that,” he says. “We couldn’t do it without the support of all the other air force elements, as well as the contracting industry partners and the like. That’s really the key to the success of the F 35.”