The US Navy (USN) for the first time in late 2019 flew an F/A-18F Super Hornet carrying an Infrared Search & Track (IRST) Block II pod under the centerline of its undercarriage.

The IRST Block II is in the risk reduction phase of development, says Boeing on 15 January. Flights at Boeing’s facilities in the St. Louis, Missouri area are to be used to collect data on how the hardware is performing. 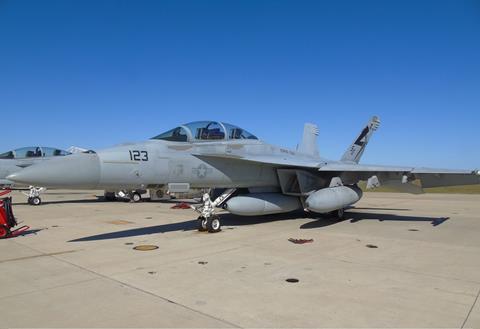 The IRST pod is part of a larger upgrade package for the F/A-18E/F Super Hornets, called Block III conversion.

Infrared search and track sensors can be used to passively detect other aircraft, including stealth aircraft, by looking for a heat signature coming off a jet’s engines. Also, because the sensor is passive – not emitting any type of radiation – it makes it more difficult for an adversary to detect.

With adversaries of the USA building stealth aircraft that are difficult to detect with radar, such as China’s Chengdu J-20 or Russia’s Sukhoi Su-57, IRST pods are becoming increasingly important to US combat aircraft. When the IRST Block II pod is used by two aircraft at once, it can create a targeting solution for an air-to-air missile, Boeing has said.

The IRST Block II pod for the F/A-18 Super Hornet is built by Lockheed Martin.

The F/A-18E/F Super Hornet Block III upgrade programme also includes enhanced networking and communication capabilities, conformal fuel tanks that extend the aircraft’s range by about 120nm (222km), a cockpit with a 21in touchscreen display, and a more powerful mission computer.

Boeing expects the IRST Block II pod to be delivered to the USN in 2021. It should reach Initial Operational Capability soon after the service receives it, the company says.