The US Navy (USN) is researching what it would take to develop an air-breathing hypersonic anti-ship missile that could be carried and launched from the Boeing F/A-18E/F Super Hornet.

As part of its Screaming Arrow Innovative Naval Prototype programme, the service wants proposals for development and testing of a controlled hypersonic test vehicle, it says in a solicitation posted online on 2 March. The USN is aiming for three missile launch tests and says the development effort could become an on-ramp to a follow-on acquisition programme of record. 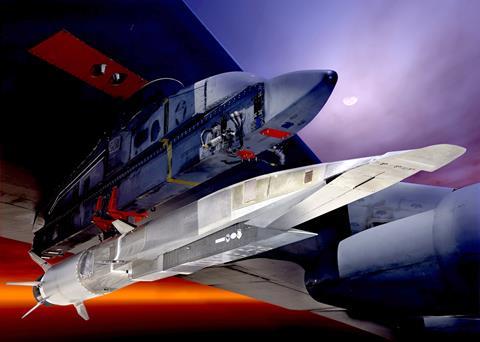 X-51A Waverider under the wing of a B-52 Stratofortress

The USN wants to leverage existing hypersonic air-vehicle and propulsion development efforts, with limited design changes. It is ultimately aiming for technology readiness level six (TRL6) for the vehicle. Technology readiness levels are a type of measurement system used to assess the maturity level of a particular technology. NASA defines TRL6 as a prototype capable of performing in a relevant environment.

The US Department of Defense is already funding several scramjet hypersonic cruise missile development efforts concurrently. Because scramjets skim oxygen out of the atmosphere, instead of carrying an oxidizer, the missiles can be made smaller than other types of rocket-propelled weapons, such as boost-glide hypersonic missiles. That ought to be helpful for fitting the missiles onto the F/A-18E/F fighter.

“The specific use case of Screaming Arrow is offensive anti-surface warfare. The threshold target set includes, but is not limited to, surface combatants and capital ships,” the USN says. “The need for Screaming Arrow technologies arises from a capability gap in propulsion solutions for servicing adversary targets at range within a compressed time of flight, which is not achievable with today’s sub-hypersonic weapon approaches.”

Analysts think that hypersonic anti-ship missiles fielded in the future by Russian or Chinese forces could make USN aircraft carriers vulnerable to damage or sinking. The high Mach speed of the missiles would give defending ships little time to respond. Having an F/A-18E/F orbiting over an aircraft carrier group, armed with hypersonic anti-ship missiles, might help serve as a deterrent. Such a missile could conceivably be converted into a long-range land-attack mission as well, which would help the Super Hornet stay outside of the weapons engagement zone of adversaries.

The USN says the desired speed of the missile has yet to be determined. However, it wants the weapon to be light and small enough that the Super Hornet could carry up to four of the missiles at once, notionally on weapons stations three, four, eight and nine. Though the service does not list a maximum weight, it notes that the F/A-18E/F ought to be able to launch and recover aboard a nuclear-powered aircraft carrier while carrying missiles.