The US Air Force (USAF) is funding development of a new pulsejet-powered decoy as it continues seeking cheaper and simpler forms of unmanned air vehicle (UAV) and cruise missile propulsion. 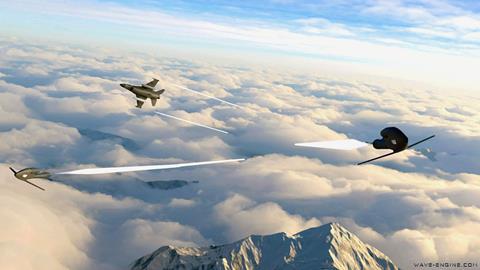 Pulsejets have been in operation since World War II, powering Nazi Germany’s V-1 flying bomb, an early cruise missile launched in the thousands from sites in occupied France against the UK.

The jet engine combusts fuel and air inside a hollow tube to produce pressure waves that push resulting hot gases out of the tailpipe, producing thrust. The process repeats rapidly, hence the name pulsejet. The powerplants are inherently simple, with few or no moving parts.

Turbines became the preferred form of jet propulsion during the Cold War, because pulsejets are typically less efficient and louder. The British nicknamed the V-1 “buzz bomb”, a nod to the weapon’s noise.

Wave Engine says it has made improvements that give pulsejets advantages over jet turbines.

“The propulsion technology provides jet performance and full authority digital electronic control in a highly cost-effective powerplant that requires no moving parts,” the company says. “Wave Engine Corp’s technology enables an order-of-magnitude reduction in the cost and complexity of jet propulsion, making it practical for a wide variety of aviation platforms for which jet propulsion was previously cost-prohibitive.” 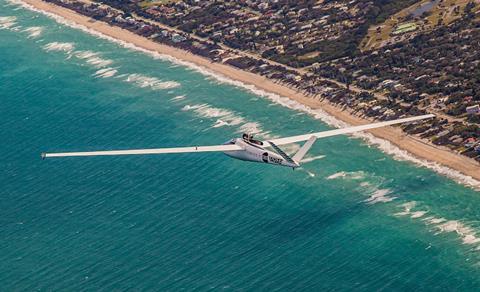 The USAF is funding several projects to develop low-cost jet engines for cheap cruise missiles and so-called attritable UAVs, which are intended to be inexpensive, limited-use drones. Such weapons can attack in swarms to overwhelm targets.

For example, the Air Force Research Laboratory is funding development and testing of Gray Wolf, an inexpensive cruise missile powered by a low-cost Kratos Defense TDI-J85, a 200lb-thrust (0.89kN) jet turbine. The USAF sees Gray Wolf missiles as a means to attack integrated air defence systems, including radar installations and surface-to-air missile batteries, it has said.

VALP – the drone to be powered by Wave Engine’s pulsejet – is to be an air-launched UAV primarily used as a decoy, the company says. A rendering released by the company shows two decoys launched from a Lockheed Martin F-16 fighter. Decoys could be used to overwhelm an adversary’s air defences or trick them into exposing their position, which would allow the USAF to locate and attack the targets.

Wave Engine says it received $2.85 million in 2019 from the US Defense Advanced Research Projects Agency to further develop its technology. In 2020, the company test-flew its pulsejet for the first time on a glider.