The US Defense Advanced Research Projects Agency (DARPA) tested a prototype of the Persistent Close Air Support (PCAS) system for the first time during the US Marine Corps’ Talon Reach exercise.

A full-system PCAS was tested during the exercise in March in an effort to demonstrate the system’s ability to share real-time situational awareness data between air and ground. It marked the first successful integration of an automated, digital, real-time co-ordination capability into a military aircraft system, DARPA says.

The system consists of two parts – PCAS-Air and PCAS-Ground. During the demonstration, a JTAC used a PCAS-Ground tablet to identify a target position near an unmanned truck and communicated this information to the PCAS-Air module inside the V-22 via a digital link added to the aircraft.

PCAS enabled both the JTAC and the aircraft’s weapon systems officer – who also had a PCAS-Ground tablet – to share real-time information, enabling them to quickly confirm the shot and execute the order, DARPA says.

The Osprey fired a non-explosive version of a specially mounted Griffin tube-launched precision-guided missile from 3.8nm (7.2 km) away to support a simulated downed friendly pilot during the exercise.

Guided by a targeting laser, the missile “hit exactly where directed” and, had it been explosive, would have destroyed the target, the agency notes. 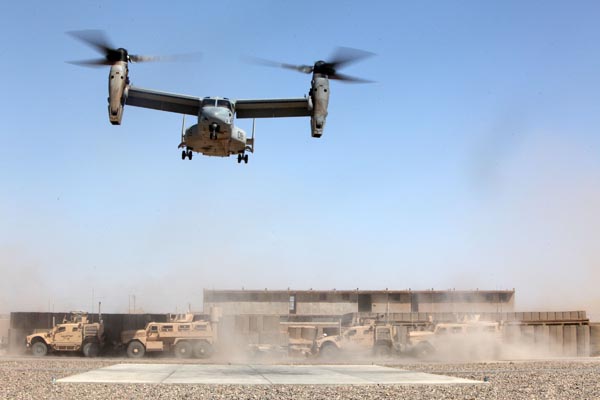 Time from the JTAC’s initiation to the point of missile impact was some 4min, which beat the 6min goal set for PCAS – and was seven times faster than the 30min it can take using current methods that rely on voice directions and paper maps.

Prior to the full-system demonstration in March, marines deployed to Afghanistan and Iraq had employed the PCAS-Ground system component. The USMC version of this is the Kinetic Integrated Low-cost Software-Integrated Tactical Combat Handheld (KILSWITCH) which, since its initial DARPA fielding, has been uploaded to Android tablets and has “dramatically improved” navigation, situational awareness, firing co-ordination and communications, the agency says.

Another part of the exercise demonstrated PCAS-Ground on its own and in a simulated night ground battle between marines and enemies. A group of marines had KILSWITCH tablets but limited situational awareness of the location of both friendly and enemy forces.

A different group of marines, also equipped with KILSWITCH tablets, arrived simultaneously and launchedan AeroVironment Switchblade unmanned air vehicle to provide surveillance and network relay capabilities. Within seconds, all the KILSWITCH tablets synced up with the UAV through the marines’ tactical radios, and automatically populated the location of all friendly forces, according to DARPA.

Raytheon serves as systems integrator for the programme, and is working with partners Rockwell Collins, General Electric, BAE Systems and 5-D Systems. The firm won the $25 million, 18-month phase-3 contract in February 2014, while the larger three-year DARPA programme is funded at $82 million.

DARPA plans to continue working to transition the system to unmanned platforms with another service partner, as well as performing upcoming flight demonstrations using a US Air Force Fairchild Republic A-10 Thunderbolt II attack aircraft.