Leonardo will in April begin a series of flight trials in the UK in which an unmanned air vehicle (UAV) will be controlled by the crew of Lynx Wildcat helicopter – so called Manned-Unmanned Teaming (MUM-T).

To be carried out in conjunction with the UK’s Defence Science and Technology Laboratory (DSTL), the tests will build on simulator work last year which confirmed the feasibility of the effort. 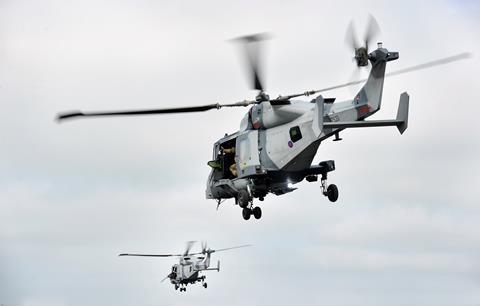 “The big idea is to test the cognitive burden on the pilot and then trying to reduce that,” the manufacturer told Defence IQ’s International Military Helicopter 2020 conference in London on 25 February.

Using a British Army Wildcat AH1 helicopter, the evaluations will be carried out from 20 April until 1 May on the Salisbury Plain training area in southwest England.

Only small modifications – the installation of an antenna - are required to the Wildcat to enable communication with the drone, which will be provided by Callen-Lenz.

With the UAV deployed around 4nm (8km) from the helicopter, the UAV will be used to search for a person in three different settings – in the open, under tree cover and in an urban area.

The drone will be piloted by the observer/gunner in the Wildcat’s left-hand seat and data from its electro-optical payload will be fed into the helicopter’s standard displays, says Leonardo.

“The key from our perspective is that we are treating the payload on the UAV as though it were on the helicopter - this way the crew are not having to plan something new.”

MUM-T is one of several capability improvements identified by both the army and the Royal Navy for their respective Wildcat AH1 and HMA2 fleets.

Also under consideration are Link 16 datalinks and additional fuel tanks for both variants, as well as the integration of Leonardo’s Seaspray 7000E radar onto the AH1; the sensor is already standard on the HMA2.

Leonardo says the higher fuel load would boost endurance to around 4h from 2h 30min at present.

However, the UK Ministry of Defence has yet to fund any upgrades for the platform, beyond the current effort to integrate new anti-ship missiles onto the navy’s Wildcats.