The work’s objective is validating the use of the MQ-9B to provide long-term, cost-effective monitoring of Japan’s maritime domain, says the company, which is working with Asia Air Survey to conduct the flights. 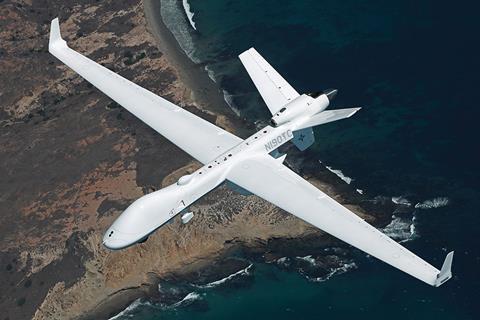 The SeaGuardian will be equipped with the Raytheon SeaVue surface-search radar.

The work follows 11 civilian demonstration flights the company conducted in May 2018 from Japan’s Iki Island, using a white and red MQ-9B Guardian. The company invested $6 million in the work, which it hailed as “the first demonstration of a long-endurance RPA [remotely-piloted aircraft] by a private company in Japan.”

In a late 2018 interview, a General Atomics executive told FlightGlobal that the Japanese Coast Guard might require “a good-sized fleet”, given the coverage area.

The 2018 flights required a range of approvals from government agencies pertaining to areas such as transmission frequencies and flight planning. A chase plane was also required. Among other things, the effort demonstrated the aircraft’s ability to monitor shipping activity, with a focus on spotting activities such as illegal fishing, the harvesting of endangered corals, and smuggling.