The report was compiled by the Royal United Services Institute and two news outlets: Reuters and iStories. 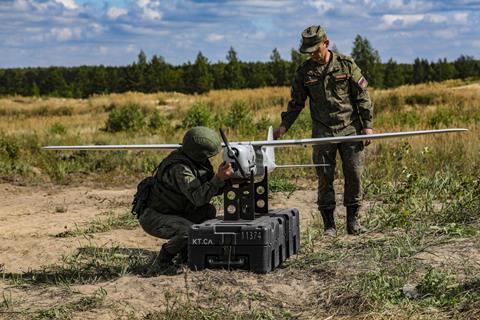 It contends that the Orlan-10 UAV is central to Russian tactics. Among other missions, it allows Russian artillery to engage Ukrainian forces within just three minutes. In the absence of UAVs Russian artillery response times are significantly longer.

“The centrality of artillery firepower to battlefield tactics on both sides means that the presence or absence of Russian UAVs in Ukraine is a core determinant of Russian lethality,” says the report.

The Orlan-10’s small size, speed of 81kts (150kph), and ceiling of 16,400ft make it hard to detect and engage. The UAV has an endurance of 16h. Payloads include an electro-optical sensor, electronic intelligence, signals intelligence, laser imaging, and electronic warfare.

The report’s authors found that downed Orlan-10s in Ukraine contain export-controlled items from companies in the USA, Holland, and Switzerland. They also looked at financial records, customs data, court records and other sources, which indicate that the subsystems are being procured by Russian firm SMT-iLogic, which was sanctioned by the US government in 2016.

“These components, which are critical both to Russia’s plans to expand UAV production and its ongoing operations in Ukraine, are being shipped to Russia by a variety of distributors based in the United States, Europe, China, South Korea and Hong Kong,” says the report.

It also observes that despite Russian sanctions Moscow been able to keep importing key Orlan-10 components during 2022.

It makes several proposals for governments about how to fight illicit procurement networks. It proposes improved data collection capabilities, better analytics, identifying and prosecuting individuals involved the evasion of export controls, and others.

Even if Moscow finds alternative suppliers for key components, Russia’s lengthy certification and testing process would at least slow the arrival of updated UAVs to its front line troops.

“Even if Russia were able to find technically viable substitutes for many of the Western components identified…integrating them into the Orlan-10 production line would create major delays, add cost and thus help buy time for Ukrainian forces. In some cases, replacing these Western-manufactured components will be impossible in the short run,” says the report.