Spirit AeroSystems’ latest Boeing 737 Max production agreement for 2020 covers barely a third of the fuselages it delivered in 2018, and appears to put Boeing at least four years behind its ramp-up schedule for the re-engined jet.

Under a 6 February memorandum Spirit has agreed to deliver 216 737 Max fuselages this year. The agreement replaces Spirit’s deal with Boeing, reached last April, through which it intended to continue delivering fuselages at 52 per month – despite Boeing’s production cut for the type to 42.

But the new pact – which depends heavily on the Max’s return to service – also shows that Spirit “does not expect” a return to the 52-per-month rate until late 2022.

This suggests that recovery to the planned 57-per-month, originally intended for 2019, is likely to be delayed until the end of 2023 – and possibly later.

Spirit had been undergoing a crucial transition to Max production in 2018, lifting the monthly rate to 52 while also coping with a design which, it says, is 35% different from the 737NGs built on the same fuselage assembly lines. 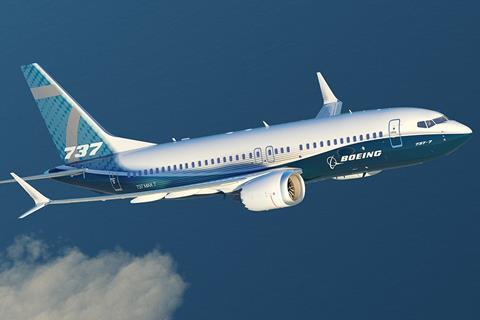 At the time Max production accounted for about half of its 737 output and Spirit expected to benefit as this proportion increased to 90% during 2019.

While it had encountered hurdles in meeting the monthly rate of 52, Spirit insisted it was confident – as a result of the mix change and its increasing experience – that it would be able to cope with Boeing’s intended hike to 57.

Spirit had been preparing by alternating daily output between two and three fuselages, to practice for a constant three-daily rate, pointing out that a rate of 57 meant it would have three “balanced” production lines, each turning out 19 fuselages monthly, with “built-in surge capacity”.

Under the new production memorandum Boeing will pay $225 million to Spirit in the first quarter of this year, including $155 as incremental pre-payment for costs and fuselage deliveries over the next two years. It also extends the schedules for previously-agreed repayments for advances, as well as pricing terms, for three years.