Both pilots of an Air India Express Boeing 737-800 are among 17 fatalities after the aircraft suffered a runway excursion and broke up after landing at Kozhikode.

The airline has disclosed that 190 occupants, including six crew members, were on board the jet.

Neither pilot survived the accident, the carrier says, although the four cabin crew did. It has confirmed 17 fatalities.

While Air India Express originally identified the aircraft as VT-GHK, the registration on the fuselage is VT-AXH.

“We regret that there has been an incident regarding our aircraft,” it says, adding that the jet “overshot” the runway after operating the IX1344 service from Dubai.

Images circulating on social media indicate that the Boeing 737 has been extensively damaged, with its cockpit separating, as it came to rest on rough ground.

NOTAM information from Kozhikode states that runway 10/28 is unavailable “due aircraft accident”.

The airline says the aircraft landed at 19:41 on 7 August, which means the arrival took place in darkness, about 50min after sunset. There is evidence that the 737 had already executed a go-around and was making a second approach, to runway 10, when the accident occurred..

Meteorological data from Kozhikode airport indicates it had been experiencing thunderstorms shortly before the accident, and that reduced visibility and rain showers prevailed at the time of the landing.

Cirium fleets data lists VT-AXH as a 14-year old aircraft, delivered to the carrier in November 2006. 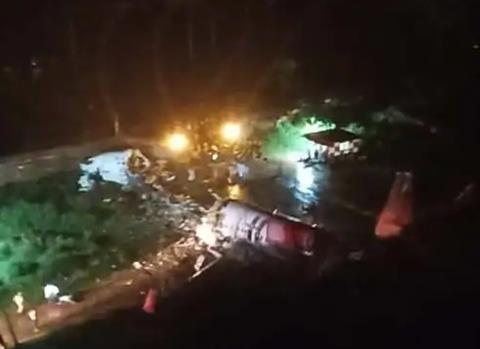