Russian investigators have determined that pilots of a Pegas Fly Boeing 767-300ER lost directional control of the aircraft on landing at Simferopol after applying asymmetric braking on a wet runway in a crosswind.

The aircraft (VP-BMC), with the first officer flying, touched down on runway 19 – which has a length of just over 3,700m – following a service from Moscow Sheremetyevo on 17 June.

Federal air transport regulator Rosaviatsia states that a 17.5kt wind was present from the south-west, generating a 13.4kt crosswind from the right of the aircraft.

The runway’s friction coefficient was 0.54 and the crew had selected the ‘autobrake 2’ setting. As the 767 landed its spoilers and braking system activated.

But the crew did not engage reverse-thrust, and then only at the minimum level, until 14s after touchdown.

Flight-data recorder information shows that over the second part of the landing roll – from a distance of 1,650m and a speed of 68kt – the crew was trying to maintain directional control in the crosswind by using left rudder, but also began to use the right-hand brake pedal.

“The resulting asymmetric braking created an additional [effect], turning the aircraft to the right, into the wind,” says Rosaviatsia. 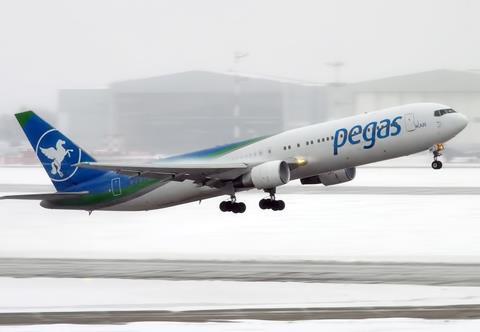 Pegas Fly was operating the 767 to Simferopol, in Crimea, from Moscow

It says the crew stopped braking with the right-hand landing-gear after realising they had inadequate control and began to brake with the left-hand main gear.

While this stopped the aircraft from turning any further, it was already 6° off course to the right, and threatening to travel off the right side of the runway.

The crew opted to use symmetric braking of the main landing-gear up to the maximum but, with a layer of precipitation on the runway, this reduced stability and directional control, causing the aircraft to continue to veer to the right at about 1,950m.

Its nose-gear travelled off the runway shoulder by 9m and the right-hand main gear by 4m, damaging lighting systems, before the aircraft came to a halt at a distance of 2,400m.

None of the 288 passengers or 10 crew members was injured and the 767 was undamaged.

Rosaviatsia says the crew explained that the landing was carried out 2-3m to the left of the centreline, with reverse-thrust used to reach 120kt. During the second half of the roll-out, as braking was applied the aircraft pulled to the right followed by an excursion of the nose-wheels and right-hand main landing-gear.

Investigation into the incident is still continuing, but Rosaviatsia has highlighted several broader operational issues raised by the event, including the need to maintain directional control in a crosswind using aileron as well as rudder, the correct use of reverse-thrust, and procedures for landing on a wet runway – including clarity regarding the handover of control between pilots on the roll-out.