The aircraft dived into a lake after failing to recover from an excessive pitch-down input by the first officer, in response to the inadvertent activation of go-around thrust.

None of the three occupants survived.

In its inquiry the US National Transportation Safety Board has highlighted the development of the auto-GCAS modification – originally for the Lockheed Martin F-16 and Saab Gripen, and recently for the F-35.

It uses a combination of sensors and flight-data monitors to analyse whether the aircraft is on a collision course with terrain, and calculates an escape trajectory which is autonomously followed if the pilot fails to respond.

Subsequent research has examined the use of similar technology on unmanned aerial vehicles. 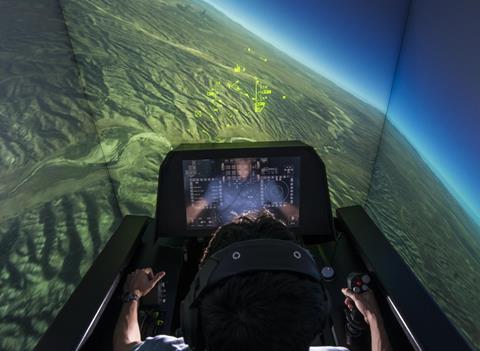 The research paper – which studied a development known as the Rapidly Selectable Escape Trajectory system, using a Learjet 25D as a stand-in – points out that over 30 Lockheed Martin C-130s have suffered controlled-flight-into-terrain accidents, and calculates that at least five could have been averted, saving 34 lives and $385 million in aircraft costs.

“Successful adaptation of an auto-GCAS system on a military performance-limited airplane could have relevance for the safety of flight operations involving civil transport-category airplanes,” says the NTSB in its inquiry into the Atlas 767 crash.

“Such an application would be consistent with recent trends for civil aviation, such as automatic landing technology.”

The Atlas inquiry found that somatogravic illusion, a false sense of steep pitch-up in the absence of visual reference, contributed to the sharp nose-down input from the first officer.

It has recommended that the US FAA convenes a panel of aircraft performance and human factors specialists to “study the benefits and risks” of adapting auto-GCAS to civil transport aircraft.