None of the three occupants survived after the jet, operated by the South African Civil Aviation Authority, crashed into a mountainous slope at a height of 2,192ft above sea level.

It had been performing an ILS calibration for runway 11 on 23 January, initial findings from the CAA inquiry state.

This calibration required the aircraft to fly along a 70° clockwise arc – sweeping 35° either side of the centreline – at 17nm distance from the runway threshold.

The jet had taken off from runway 11, turning right to head for the southern end of the arc, then turning right to follow it, tracking from radial 250 to about radial 330 relative to George airport.

As the aircraft turned onto the arc over Mossel Bay it was flying at 3,000ft and – as it approach the higher terrain at around radial 310 – it began to climb towards 4,000ft. 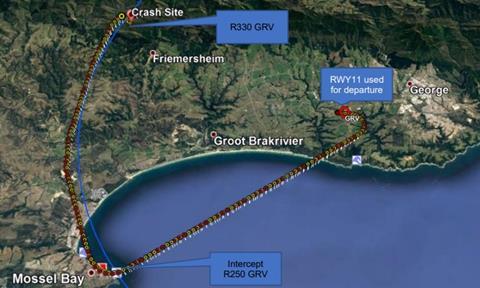 Preliminary flight-data recorder information reveals the aircraft levelled off at about 3,900ft and started banking to right at 35°.

It then began to pitch nose-down, initially at about 10° but increasing over the space of 5s to more than 32°.

The jet’s airspeed rose to 275kt and its bank increased to an excessive level of 105° before reducing to 75°.

During the rapid descent it lost some 1,500ft in the space of a few seconds, the inquiry says, reaching an altitude of 2,400ft. Recorder data shows the steep nose-down attitude was reduced to 17.5° and its right bank brought back to just 10°.

The inquiry says that, 3s before the terrain collision, the aircraft’s nose “pitched up”. But the jet was not carrying – nor was it required to carry – a cockpit-voice recorder, and investigators have been unable to determine whether its terrain-warning system sounded.

Based on this information, says the inquiry, the mountain tops at the northern end of the calibration arc would have been “obscured” by cloud.

Wreckage at the crash site indicates the aircraft struck an upslope terrain at a shallow angle and an airspeed of 286kt.

The inquiry has given no indication as to the reason for the extreme roll and sudden descent.

But the CAA is investigating an accident involving its own aircraft and has recommended that, given the circumstances, the South African transport ministry should consider whether the investigation ought to be delegated to a different investigation authority.