French investigators are citing a lack of co-ordination between Lyon airport’s ground and local controllers as having led to an Air Algerie Boeing 737-800’s commencing its take-off roll while snowploughs occupied the runway.

Investigation authority BEA specifically highlights the decision to keep the snowplough communications on the ground controller’s radio frequency rather than that of the local controller overseeing the runways.

Co-ordination between the two controllers, it adds, was “compromised” by the use of “unusual and ambiguous vocabulary” and a lack of updates.

Low-visibility procedures were in effect at the airport before the 14 November 2019 incident, as a result of low cloud base and the presence of snowfall and mist.

Landings were being conducted on runway 35R with departures carried out on 35L. 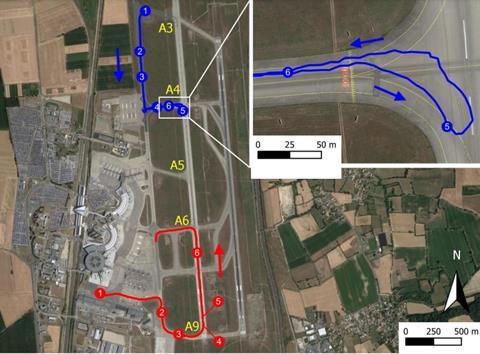 The 737 (7T-VKR), bound for Annaba, was transferred from the ground frequency to the tower’s local controller frequency as it waited at a holding point near intersection A9 at the southern end of 35L. This controller cleared the aircraft to line up and take off.

Just 6s later the lead snowplough driver asked – and was granted – permission from the ground controller to “make the junction” with runway 35L in order to clear snow from intersection A4, some 2,100m along the runway from A9.

About 30s after the lead vehicle entered the runway area, the 737 crew began the take-off roll, travelling for 5s and reaching a speed of 63kt before the local controller ordered its crew to halt the departure. The aircraft slowed to 10kt and left the runway at intersection A6.

BEA notes that the 737 subsequently departed from the same point a few minutes later, becoming airborne by the A5 intersection located about 670m before A4.

Investigators point out that the snowfall had been underestimated and that, although a suspension of operations was considered, no decision on this was taken. High workload and the re-opening of a runway while snow clearance still required entry of vehicles to its intersections contributed to the incident, says BEA, which adds that stop-bar configurations were “incompatible” with snow-removal circuits followed by the snowploughs.

BEA says the incursion was “symptomatic” of “confusion and disorganisation” in relation to managing the snowfall.

New instructions were issued in the aftermath of the incident requiring clearances to enter the runway intersection area to be given on control tower frequencies.

BEA is recommending that clear guidance should be given to ease decisions on restricting Lyon operations – including limiting traffic or suspending flights – in poor conditions, and adds that similar consideration should be given to other airports given that French civil aviation authority databases list at least 14 other snow-clearance incursion incidents in the five years from 2015 to 2019.