French investigators have disclosed that Airbus is introducing a modification for conventional A320-family aircraft to prevent excessive pitch in the event of a false-glideslope encounter.

The development is contained in the investigation authority BEA’s findings into the unexpected pitch-up by an Air France A318 after it intercepted a false 9° ILS glideslope during an approach to Toulon in December 2019.

Such an interception causes a reversal of the autopilot response compared with the true 3° glideslope, and BEA says the aircraft rapidly pitched to a nose-up attitude of 30°.

BEA says the implementation of pitch-up excursion protection in the avionics of the latest Airbus models – the A380, A350 and A320neo – avoids the excessive attitude.

It states that the protection will be rolled out across all version of flight computers fitted to the conventional A320 family from 2023. 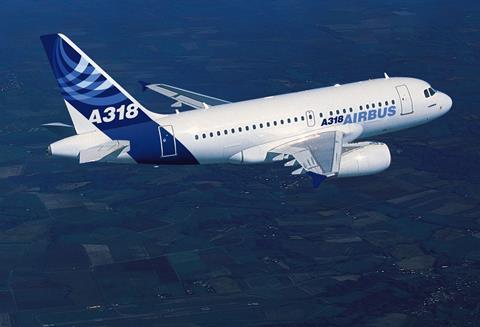 Dutch investigators carried out an analysis of false-glideslope events after an incident in Eindhoven, in May 2013, involving a Ryanair Boeing 737-800 that intercepted a 9° glideslope.

This triggered a pitch-up upset and caused the airspeed to drop, despite the autothrottle’s commanding higher thrust, leading to stick-shaker activation – circumstances similar to those encountered by the A318 crew.

The Dutch Safety Board’s examination, published in June 2014, stated that Boeing was incorporating a software change into the flight-control computer which would limit the climb rate in glideslope mode.

“This change has been shown to eliminate the pitch-up when the [aircraft] captures the reversed-signal 9° glideslope,” it added.

Boeing also told the board that simulations had shown that other models – including the 747, 757, 767, 777 and 787 – used a different glideslope interception and anomaly-detection logic which prevented their capturing the false 9° signal.

Air France published a document for pilots last year, in the aftermath of the A318 incident, regarding the interception of glideslopes from above.

It states that aircraft above a 5° slope with respect to the threshold face a “significant risk” of capturing a side lobe from the ILS transmissions, and therefore encountering a false glideslope – pointing out that a simple height-to-distance check can help pilots assess the situation.