Icelandic investigators believe a Primera Air Nordic Boeing 737-800 overran at Reykjavik’s Keflavik airport, almost colliding with the localiser structure, after landing long on a shortened runway which had only been partially cleared of snow.

Investigation authority RNSA found that runway 19 – operating with a displaced threshold owing to construction work – had been swept just before the aircraft made an initial landing attempt, during which the crew opted to execute a go-around.

The braking coefficient after the sweep was 40, just at the threshold of being categorised as ‘good’. But RNSA says the braking action probably “deteriorated quickly” as snow continued to fall.

While the snowploughs were scheduled to move to the parallel taxiway E, the sweeping supervisor asked to travel to the taxiway via runway 19.

The tower controller “presumed” the snowploughs would travel the length of the runway and vacate at the end, says the inquiry.

But instead the snowploughs only partially swept the runway, over a length of 1,070m and width of 25m, before vacating to taxiway E. The sweeping supervisor did not clarify to the tower that the snowploughs had only travelled part-way along the runway before exiting.

Under Keflavik snow-removal procedures the active runway was supposed to be continuously prioritised, to achieve braking coefficient of at least 38 over a 45m width, before taxiways and aprons were swept. These procedures were “not adhered to”, says the inquiry.

The inquiry says maintaining ‘good’ braking action was “particularly difficult” in the snowy conditions, adding that communications between the sweeping supervisor and the tower were “lacking discussion” of the runway condition after the 737’s go-around and its second approach.

It states that the 737 crew could have requested updated braking action while the tower could also have been more pro-active in updating the crew about the runway condition – but notes that the tower controller had been “quite busy” because he was also overseeing Keflavik ground movements at the time.

The crew had selected an autobrake setting which was close to the available shortened landing distance of 2,182m, but the captain – who was flying – intended to switch to maximum manual braking after touchdown.

During the descent the captain saw the runway approach lights at about 600ft, above the decision altitude of 440ft. But the displaced threshold meant there was a “long gap” with no lights, says the inquiry.

“This resulted in the flight crew losing visual sight of the approach lights, after passing over them, without having the runway yet in sight,” it adds. Cockpit-voice recorder information suggests the pilots did not see the precision-approach path indicator lamps until 13-15s after the aircraft’s automated ‘minimum’ call-out. 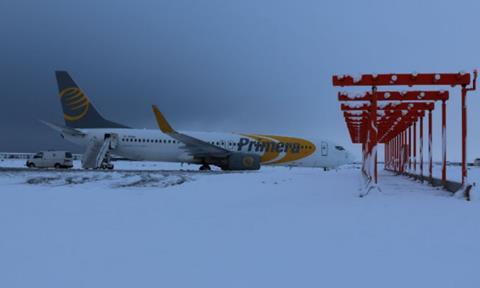 As the aircraft neared touchdown the snow was falling heavily and investigators suspect the captain’s depth perception was “degraded due to illusion”. The 737’s descent rate had fluctuated during the approach, triggering a ‘sink rate’ alert before slowing in the final moments to the point where the jet floated during the last 20ft.

This float meant the aircraft did not touch down until 765m beyond the displaced threshold – over 300m further than calculated – leaving just over 1,400m in which to stop.

As the autobrake activated and the thrust-reversers deployed the crew felt the aircraft was decelerating normally. But as the aircraft travelled into the second half of the runway, which had not been cleared of snow during the partial sweep, the crew realised the deceleration was reducing.

Manual braking and reverse-thrust was insufficient to stop the 737 and it overran at 48kt.

“Once [past] the end of the runway, the [captain] became aware that they would not be able to stop before hitting the localiser structure at the end of [the opposite-direction runway 01],” says the inquiry.

The captain made the decision to veer the 737 to the left onto gravel, enabling the main landing-gear to sink into the softer ground and slow the aircraft more effectively. It came to rest with its nose on the left side, and just short, of the localiser structure.

None of the 138 passengers and six crew members was injured in the incident, which occurred as the aircraft returned from Alicante on 28 April 2017. The Latvian-registered jet (YL-PSH) sustained only minor damage to a main landing-gear wheel.