UK investigators have found that a Royal Air Maroc Boeing 737-800 lifted off from London Gatwick at nearly 200kt, and close to the end of the runway, after the crew did not receive automatic speed call-outs during the take-off roll.

The crew of the aircraft (CN-RGJ), bound for Casablanca on 20 February, had calculated a V1 speed of 144kt and a rotation speed of 152kt for the departure from runway 26L.

But after the routine 80kt airspeed confirmation check by the captain, the crew did not receive the expected automatic call-out at V1. 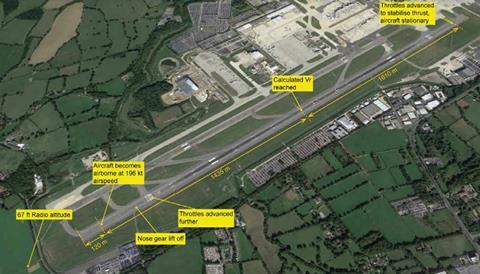 The UK Air Accidents Investigation Branch says the “likely” explanation for the missing call-out, as well as the absence of speed bugs on the primary flight display, is that the take-off V-speeds were not present in the flight-management computer.

No V-speeds were recorded by the aircraft’s quick-access recorder, it adds, which “suggests they were not loaded” into the computer when the engines were started.

The inquiry says, however, that the captain believes the speeds were correctly loaded. Other parts of the V-speed entry procedure had been completed, such as the loading of aircraft weights and the assumed temperature.

Investigators raised the possibility that the crew correctly entered the V-speeds but then inadvertently deleted them.

Take-off speeds can be automatically deleted by changes made to the flight-management computer data, such as amendments to zero-fuel weight, take-off thrust, or outside air temperature.

Boeing is “not aware” of any way to delete the V speeds without relevant indications – including messages on the control display unit, and the primary flight display – appearing, the inquiry points out. But the crew did not recall seeing any of these alerts.

Upon realising that no V1 call-out had occurred, the captain noticed V-speed bugs were missing from the aircraft’s speed tape.

The inquiry says pilots who are used to reliable automatic systems can take time to react if cues are unexpectedly absent.

Believing the 737 to be travelling slowly, the captain allowed it to continue accelerating and the aircraft reached 189kt before rotating, lifting off at 196kt – some 13s after the planned rotate speed, and just 120m short of the runway end. Thrust was slightly increased just before rotation.

The inquiry acknowledges that the captain felt it “better to have more speed than less”, but notes that 189kt is “considerably more” than typical rotation speed.

Boeing’s training manual states that, if the V-speeds are not displayed, the monitoring pilot – the captain in this case – should announce the V1 and rotate speeds to the flying pilot “at the appropriate times” during the take-off roll.

None of the 139 passengers and six crew members was injured during the incident.