UK investigators have found that a parked Bombardier Q400 had its chocks prematurely removed, and that its parking brake hydraulic pressure had depleted, before it rolled 70m across a taxiway and collided with another aircraft at Aberdeen.

No-one was injured but the Air Accidents Investigation Branch points out that the outcome “could have been different”. The aircraft had stood for 45min with its chocks removed and, just 5min before it rolled, a taxiing Sikorsky S-92 helicopter had passed in front, while a refuelling truck was also operating nearby.

Several personnel also risked injury by attempting physically to stop the Q400 as it moved, but it only came to a halt after striking a parked and empty Loganair Embraer ERJ-145. 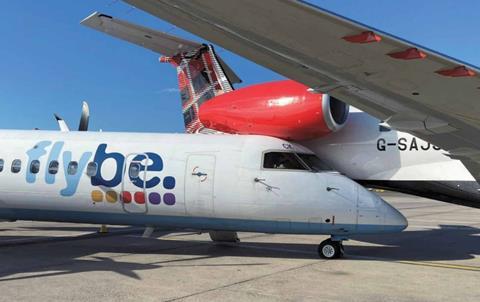 The former Flybe Q400, which had not flown since March this year, had been chocked on a stand with a 1° downward slope.

It was due to be ferried to Weeze on 16 June and the pilots – who had formerly flown for Flybe, and used its standard procedures – arrived early to carry out detailed checks to ensure the dormant aircraft was fully operational.

The pilots were supported by a ground-handling dispatcher and a representative of the aircraft’s owner.

Evidence suggests a “misunderstanding” led the dispatcher to believe the captain had authorised the removal of the main landing-gear chocks, says the inquiry, even though both pilots stated that no permission had been given for chock removal.

The dispatcher was aware that the nose-gear was to remain chocked until after the engines had been started. But a “miscommunication” with the owner’s representative, the inquiry says, appears to have led to the nose-gear chocks also being inadvertently removed.

Neither pilot noticed, during separate walkrounds, noticed the missing chocks. They had already established that the chocks were in place upon arriving at the aircraft, and were not required to check again.

The inquiry says the pilots would have focused on checklist items, aware of their reduced currency and that the aircraft had not flown for several weeks.

“This may have left less capacity to notice anything additional that they were not specifically looking for or expecting,” it adds.

Four days before the accident a return-to-service check had included an engine run and test of the parking-brake system.

But although the system had been pressurised to 3,000psi during the engine run, the inquiry says a gradual pressure depletion while the aircraft remained parked was “not unusual” – the pressure could decline by as much as 1,900psi in just 2h.

The captain’s walkround included a visual check of the parking-brake accumulator pressure gauge, which read about 500psi, a figure corroborated after the accident.

Investigators state that the parking-brake hydraulic pressure “could not have been more” than this accumulator pressure, although residual pressure might have been sufficient to stop the aircraft moving forward straight away.

As the Q400 started to roll, 45min after chock removal, the dispatcher alerted the pilots in the cockpit, who both applied toe-brakes. The captain also twice cycled the parking-brake lever, but recalled noticing that the brake’s hydraulic pressure read zero.

The aircraft did not respond to the steering tiller and attempts by engineers and other ground staff to halt its progress – including running to fetch chocks – failed.

It rolled from stand 31 to stand 11, a downward slope, and hit the parked ERJ-145 at about 5kt, the Q400’s nose wedging under the ERJ’s right-hand engine and lifting the jet’s right-hand main landing-gear off the ground. The Q400’s upper fuselage skin, cockpit window and emergency hatch, and the ERJ’s nacelle were damaged.

Several safety actions have been implemented since the accident, particularly focused on ensuring chocks remain fitted to aircraft until permission has been given to remove them.