Short-circuit could lead 777 thrust levers to advance during taxiing

Operators of Boeing 777s are being cautioned that autothrottles could trigger an uncommanded advancement of the throttle levers on the ground, after a number of instances.

Most of the occurrences have taken place during taxiing.

But in one event, says the US FAA, the uncommanded autothrottle advance happened after landing, before the aircraft’s speedbrakes were retracted.

Analysis of the events have traced the issue to a short-circuit between grounding wires for the take-off/go-around switches which command take-off thrust during a missed approach.

Such a short-circuit causes the aircraft to detect, erroneously, that the switches have been pushed. This in turn results in the autothrottle adapting to the thrust reference mode, and setting the thrust levers to generate the required take-off power level. 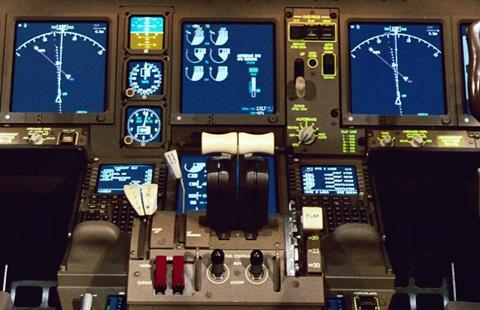 While the FAA does not consider that the situation justifies an airworthiness directive, it has issued a special bulletin to 777 operators to highlight the issue.

It points out that a previous Boeing service bulletin, from December 2015, provides operators with directions for changing ground wiring in the take-off/go-around switch.

Boeing also distributed a bulletin last year to pilots advising that they monitor the thrust levers and, if necessary, prevent their uncommanded advancement by the autothrottle. The FAA is recommending that 777 operators introduce the actions “at the earliest opportunity”.