Investigators have determined that a Jet2 Boeing 737-800’s unexpected forward movement during an engine run-up startled the first officer, who then omitted to set full take-off thrust.

The run-up to 70% N1, intended to clear any ice from the engines, was carried out after the jet lined up on runway 12 at Kuusamo airport in Finland on 1 December last year.

But while the aircraft was supposed to be held on the toe-brakes, only 600-700psi of brake pressure was applied when some 1,000-2,000psi would have been necessary.

Some 12s after the brakes were applied, as the engines were increasing to 70% N1, the aircraft began to move forward.

The crew had previously agreed that, should this occur, they would release the brakes and continue the take-off roll.

According to the UK Air Accidents Investigation Branch, the first officer felt the 737 start to “slide and yaw” and was “startled” by the movement as well as the proximity of snow banks next to the runway. 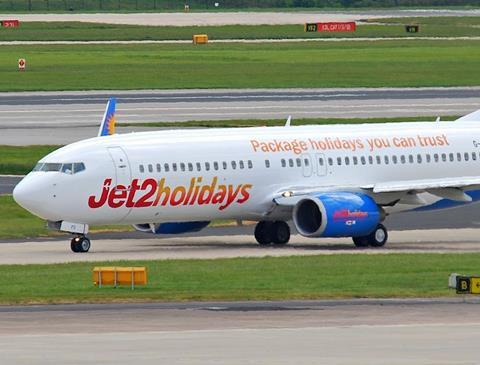 Standard procedures for the carrier require the first officer to press take-off/go-around thrust button, then remove their hand from the thrust levers. The captain then places their hand on the levers for the take-off roll.

But owing to the unexpected aircraft movement, the first officer forgot to push the button, and the jet accelerated with just 70% N1 thrust – rather than the 89% calculated for the departure from runway 12’s intersection A.

The captain was distracted by a radio transmission and neither pilot checked the thrust setting.

Flight-data recorder information shows the aircraft reached the V1 decision speed with just over 1,500m of runway remaining and became airborne 400m from the end.

“Both pilots reported that something was not right during the take-off but, at the time, neither could resolve what was wrong,” says the inquiry.

“They felt the acceleration and the cadence of the take-off was slightly slow but thought this might be due to the runway contamination. The feeling was not compelling enough for them to abort the take-off.”

The aircraft (G-JZHL) climbed away slowly until the crew realised, at a height of about 250ft, that the thrust was insufficient and applied the correct power setting.

No passengers had been on board the 737, and the two pilots and four cabin crew were not injured. The aircraft landed without further incident at London Stansted, but the length of the sector meant the 2h cockpit-voice recording was overwritten.

The inquiry says the carrier took several steps to increase safety after the event, including monitoring of data to detect issues with brake pressure during engine run-up, introducing run-up with distraction into simulator checks, updating procedures and highlighting the importance of applying sufficient braking.

Investigators point out that the first officer, while subsequently trying out brakes in a simulator session, found that the brake pedals had “significantly more travel” than he had previously been using.