US FAA sets out initial standards for eVTOL vertiport designs

US aviation regulators have unveiled design guidance for vertiports, as the aerospace industry progresses with multiple proposed eVTOL aircraft.

It focuses on safety-critical geometry, with dimensions for take-off and landing zones, as well as approach and departure paths in the surrounding airspace.

The guidance also sets out initial criteria for lighting and markings – including a recommended vertiport identification symbol – plus standards for battery and electric charging infrastructure.

Requirements for vertiports situated near airports, as well as those on top of other structures, are also covered.

The FAA says it anticipates a “high rate of operations” at many such vertiports.

But it acknowledges that its guidance is “prescriptive and conservative”, as it does not have sufficient validated eVTOL performance data.

“Vertiport guidance is expected to evolve into a performance-based design standard, potentially with aircraft grouped by their performance characteristics,” it states in the associated engineering document.

The guidance is currently based on aircraft with a maximum take-off weight of 5,670kg (12,500lb). 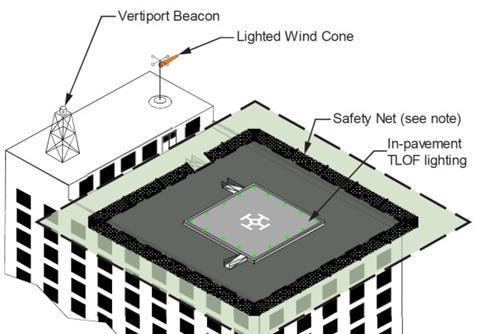 Its design work in the area dates back more than 30 years, long before the current evolution of eVTOL transport, and was initially aimed at addressing the emergence of civil tiltrotor aircraft.

“The intended aircraft were never used commercially,” says the FAA, adding that it cancelled its advisory circular on the issue in 2010.

“Currently the closest type of aviation infrastructure, being used by many for comparison purposes, is heliports and helistops.”

But the FAA says eVTOL aircraft are “not proven” to perform in the same fashion as convention helicopters or large tiltrotors.

“There is currently limited demonstrated performance data on how [eVTOL] aircraft operate,” it adds.