Virgin Orbit’s attempt at a maiden flight of its air-launched LauncherOne rocket may have ended with a vehicle in the Pacific ocean off the California coast rather than in orbit, but the company is talking up the mission as a milestone partial success on the way to commercial operations.

By carrying its rocket - built in Long Beach - to 35,000ft under the wing of an ex-Virgin Atlantic Boeing 747-400 - named Cosmic Girl and based at Mojave Air & Space Port - the Virgin Group’s satellite launch business promises a speed and flexibility of operations that it hopes will be a winner in a nascent market for launching relatively small satellites. 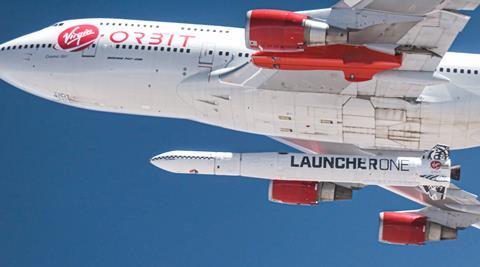 The Monday 25 May mission involved flying west from Mojave before turning south over the ocean, following a racetrack-shaped loop to verify alignment with the FAA-approved launch corridor and, again pointing south, releasing the rocket from a steep climb. During a free-fall drop of about 3s, the rocket’s fuel tanks were pressurised and then the first stage engine ignited.

According to the company, for about 9s after drop the flight went “perfectly” - and then “something malfunctioned, causing the booster stage engine to extinguish, which in turn ended the mission”.

As vice-president special operations Will Pomerantz tells FlightGlobal: “Up until the moment of the anomaly, things were going so smoothly that, well, I can’t get over it.”

While the cause of the shut-down and date for a second attempt are still to be determined, the flight delivered “solid data from hundreds of channels and sensors [indicating] performance that is well-matched to our predictions”.

And critically, says Virgin Orbit, this first-ever orbital launch attempt from Mojave relied on “a truly mobile launch infrastructure”, with all equipment and even a mission control base delivered by road or aboard Cosmic Girl and “we completely demonstrated that capability”.

LauncherOne carries no explosive ordnance for destruction in the case of failure; rather, as Pomerantz says: “We safe our vehicle by terminating thrust, not terminating the vehicle.” Had the rocket strayed from its designated launch corridor, an automatic system - which worked properly throughout the maiden flight - would have shut down the engine.

Pomerantz adds that being both liquid fuelled and air launched gives Virgin Orbit the advantage of doing away with dangerous, complicated and heavy explosive systems. Its only rival in commercial air launch - the Northop Grumman-operated Pegasus system, carried underneath a modified Lockheed L-1011 - is a solid-fuel rocket, which once ignited cannot be shut down.

Pegasus has flown more than 40 times since 1990, most recently in October 2019. But customers have been scarce in recent years; a flight is understood to cost in excess of $40m.

Designed to put payloads of up to around 400kg (880lb) into low-Earth orbit, LauncherOne is slightly smaller than Pegasus but is being marketed at just $12 million per flight.

Virgin Orbit is understood to have launch contracts worth several hundred million dollars, including with NASA, the US Space Force and the UK Royal Air Force. A prominent early customer was satellite communications startup OneWeb, which recently collapsed into administration.

Air launch, which dates to the 1950s and the USAF’s X-15 programme, cannot match fixed-position flights for payload but offers speed, flexibility and portability. In addition to Mojave, Virgin Orbit is signed to fly from Cornwall in the UK, Japan, and the Pacific island of Guam. 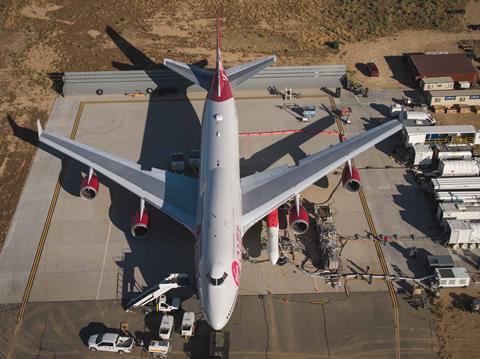