Boeing has unveiled a concept for a passenger-carrying version of a futuristic hypersonic military aircraft design that emerged a year ago.

The release of the new concept image at the American Institute of Aeronautics and Astronautics-sponsored Aviation conference in Atlanta on 26 June comes about 18 months after Boeing chief executive Dennis Muilenburg predicted hypersonic airliners would be available in “the next decade or two”.

Most definitions of hypersonic speed start at Mach 5.0, or roughly eight times the cruise speed of most modern airliners. 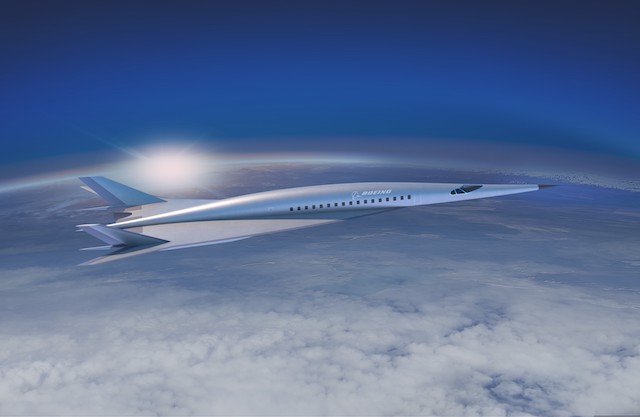 The concept represents a vision for a vehicle that may be possible in 20-30 years, Boeing says.

“We envision this to fly at the highest speed of Mach 5,” Boeing tells FlightGlobal.

Boeing declines to share such details as potential seating capacity and range of the concept, saying such parameters remain speculative at this point.

“One big reason we don’t have this quite yet is that we still have many technical and regulatory challenges to overcome before we make hypersonic flight a reality, not to mention the market that needs to develop to make a business case for the average person to be able to afford hypersonic flight,” Boeing says.

It also follows decades of Boeing research and development into hypersonic techonology. Within the last 15 years, they company has built and flown a hydrogen-powered research vehicle at nearly Mach 10 and a jet fuel-propelled experimental missile at speeds up to Mach 5.

“While we are not currently building a hypersonic aircraft, our advanced concepts in conjunction with our efforts to develop enabling technology position us for the time when customers and markets are ready to reap the benefits of hypersonic flight,” Boeing says.