Work is underway, as part of a UK government-funded project, to convert a commercial unmanned air vehicle engine into a hybrid power system for safe integration of UAVs into national airspace.

The AIRSTART effort – or Accelerated Integration of Reliable Small UAV systems Through Applied Research and Testing – sees a consortium of partners led by Airbus explore the appropriate technology and regulations to increase the safety of small UAVs so they can carry out advanced operations.

Funding of £3.2 million ($4.5 million) was allocated in April 2015 and the 27-month programme officially began later that year. Four areas of development are being considered: high-speed laser communications; detect and avoid technology; obstacle detection; and high-efficiency engines.

The UK Civil Aviation Authority and end users are interested in using UAVs weighing up to 150kg (330lb) for more advanced applications, such as powerline inspection, and also wish to carry out beyond-line-of-sight operations, Al Savvaris from AIRSTART partner Cranfield University, tells Flightglobal.

Cranfield is working on the hybrid propulsion system, converting a Rotron UAV engine into a hybrid combustion-electric system. It plans to start with the 58hp (43kW) RT600 engine then move on to the smaller 30hp RT300.

Most UAVs in this weight category are single-engined systems, so a hybrid propulsion system would provide redundancy of some 20min if the engine fails, Savvaris says.

Cranfield is developing a test rig UAV, with a wingspan of 4m (13ft). Working with Rotron, the engine will be integrated soon, after which the power management system and motor generator will be introduced. Testing will be carried out at Rotron’s facilities in Dorset, in the southwest of the UK.

Other partners include Blue Bear, Callen-Lenz, Qinetiq, the University of Southampton, plus UAV trade association ARPAS-UK. Southampton is incorporating 3D printing of UAV parts into the project, which it has previously demonstrated in a UAV design flown off a Royal Navy ship. 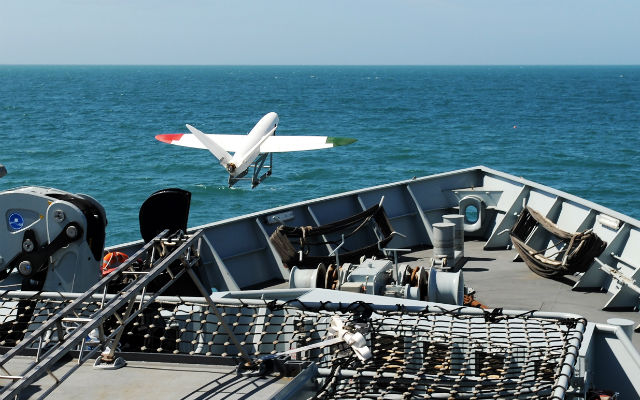 The project is similar to the defunct Autonomous Systems Technology Related Airborne Evaluation and Assessment (ASTRAEA) effort that also sought to develop technology and regulations for the integration of UAVs into national airspace.

The project was partly funded in increments by the UK government’s business department, but it emerged in September the most recent funding request had been rejected.

The government attributed this to a decision to focus on the broader industrial base to also include small and medium-sized enterprises, and shortly after ASTRAEA funding was rejected, the AIRSTART programme officially kicked off.