Rolls-Royce senses that the aerospace industry is sceptical about hydrogen’s potential as a fuel for long-haul operations.

“This isn’t a Rolls-Royce thing,” he says. “This is an industry thing. For long-distance international travel the industry doesn’t see a technology solution that’s appropriate – other than synthetic aviation fuel.” 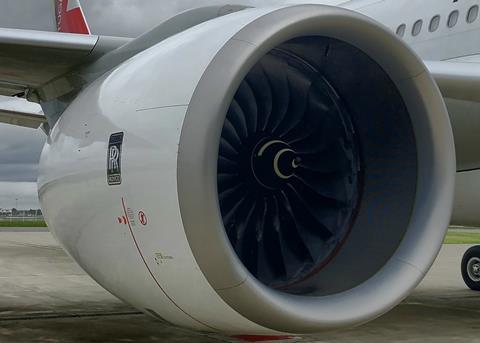 Rolls-Royce, whose engine activities depend heavily on the long-haul sector, has embarked on a programme to ensure that its civil aircraft powerplants are compatible with 100% blends of sustainable aviation fuel.

“Hydrogen will play its part in lots of different sectors [but is] probably less likely to play a part in long-distance international travel,” says East.

He says full electrification, hybrid powerplants, and hydrogen “all…have their role to play” in the short-haul sector.

“But in the long-distance widebody space, it’s going to be sustainable aviation fuel,” he insists.

He believes that the cost of such fuel “at scale” will be around twice the fossil fuel, but stresses: “That’s a little bit of an industry guess – not a Rolls-Royce guess.”

East states that the manufacturer could potentially benefit from the scaling-up of sustainable fuel production, because it requires a similar scaling-up of electrical production for which Rolls-Royce can offer small modular nuclear reactors.