Malaysian carrier Malindo Air says it has not revealed any plans about adding Boeing 737 Max aircraft to its fleet, after the country lifted the operational ban on the type.

A report from Malaysia’s New Straits Times, citing unnamed sources at the airline, claims that the Lion Group carrier was working with the Civil Aviation Administration of Malaysia (CAAM) to resume operations of the 737 Max. 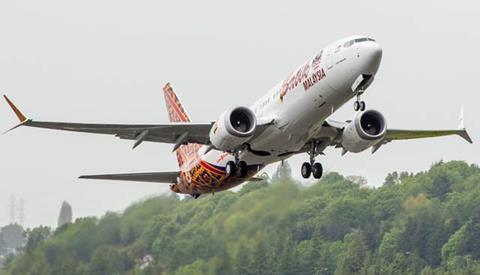 Malindo was the world’s first carrier to fly the 737 Max 8 in 2017, but since the aircraft was grounded in 2019 following two fatal crashes, it has withdrawn its fleet of 737 Max jets from service.

The report adds that the aircraft would come from sister carrier Lion Air of Indonesia, which holds a substantial orderbook for the type. A Lion Air 737 Max crashed in 2018 after taking off from Jakarta, killing all 189 passengers and crew.

The unnamed source also says Malindo was looking to reintroduce the type on routes to selected cities in Southeast Asia, Australia, India, as well as China. Both Australia and India have lifted the grounding on the 737 Max, but the type still remains banned in China.

The carrier, in response to FlightGlobal’s request for comment, says any plan about the aircraft, “if there is any”, has not been revealed to any party, including the media. It did not elaborate further.

Malaysia on 2 September lifted the grounding of the 737 Max, ending an operational ban that lasted for 2.5 years. It was the first country in Southeast Asia to unground the popular widebody.